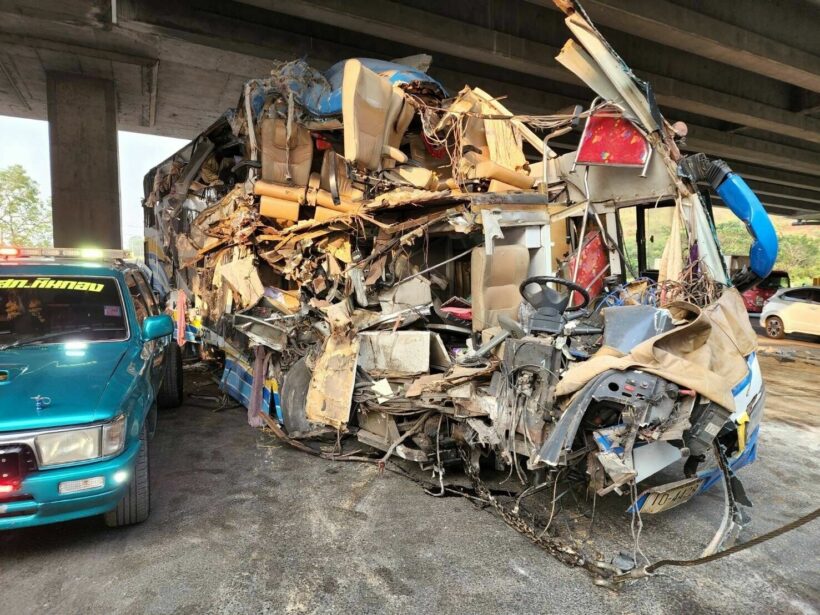 The bus driver in the fatal accident in Saraburi, killing eight passengers after he crashed into a bridge pillar, had his licence revoked by the Department of Land Transport. The department is also considering penalities for the state-run Transport Company, which was operating the Bangkok – Suwannaphum bus carrying more than 30 passengers.

The driver, who was later found to have methamphetamine in his system, says he nodded off when the double-decker bus hit a supporting pillar for an overhead bridge, ripping the right side of the bus. Eight passengers died and more than 20 were injured. The 30 year old driver, Narinsart Hongsa, reportedly confessed to police and Saraburi’s Department of Land Transport that he used the drug while driving.

The driver was charged with reckless driving causing death and injury and using Category 1 narcotic while servicing. The public bus license of the double-deck bus was also withdrawn. The Transport Company will also face punishment for recklessness. The penalties will be according to transportation safety under the Road Traffic Act.

The Department of Land and transport also sent the safety specialists to investigate the other eight buses that service on the same route. The buses, drivers, and relevant staff were investigated and checked to ensure passengers’ safety.

HiuMak
13 hours ago, Thaiger said: The bus driver in the fatal accident in Saraburi, killing eight passengers after he crashed into a bridge pillar, had his licence revoked by the Department of Land Transport. The department is also considering penalities…
TSS
'The driver was charged with reckless driving causing death and injury and using Category 1 narcotic while servicing.' yeah, but revoking his license? Seems a bit harsh...

DoUKnowWhoIAm
Sadly, with the way things work here, I wouldn't be surprised if the maniac will be driving bus pretty soon again. In any case, the best advise is to stay away from these death trap busses.

Benroon
Bus drivers all over the world are nut jobs - fact !