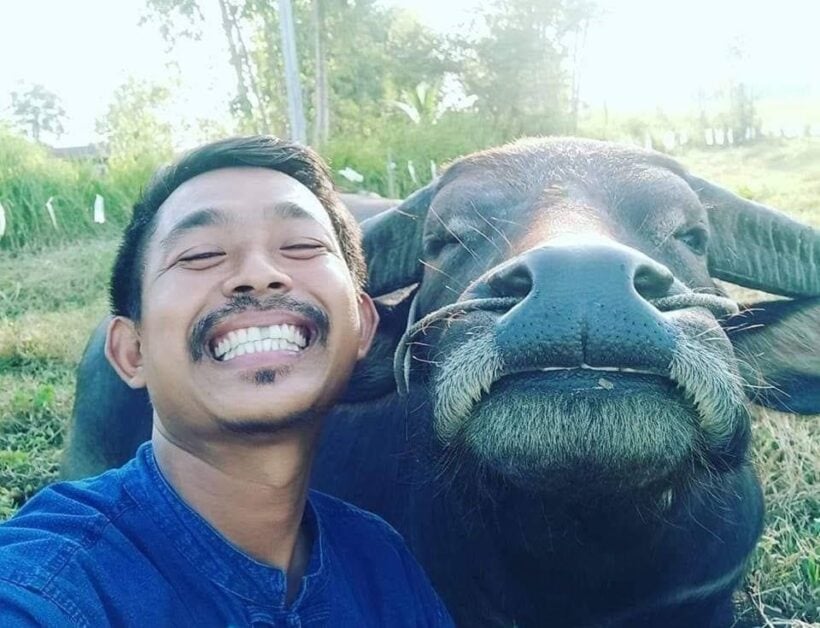 Surat had been hired to take care of the buffalo.

Police say, having seized the animal and cash as evidence, they will ask the Anti-Money Laundering Office to help check Surat’s transactions as part of the investigation.

Noen Kham district resident Surat – whose selfies with the “smiley” buffalo Thong Kham went viral on Facebook and made them both famous – is in trouble because he sought donations to raise 100,000 baht so he could buy his four-legged friend. In two days, he was able to raise 135,969 baht in a crowd-funding campaign to “save” his buddy.

Thong Kham is one of three buffaloes that Surat was hired to temporarily take care of since early this month.

However, after Surat handed 100,000 baht to the buffalo owner’s representative, things did not end happily as expected.

Boonlert also said his plan was to sell Thong Kham to a buffalo conservation centre, not to the slaughterhouse as Surat claimed. However, Surat tearfully denied any wrongdoing and insisted that his intention was to look after the buffalo the best he could and create smiles for people.

He said he has not done anything with the remaining money, and had even asked his new-found Facebook friends for ideas.

Yesterday morning, Surat saw Thong Khom taken away to the Bangkok precinct in another farmer’s pick-up truck, and said he hoped his “friend” would eventually be returned to him. He also claimed that Boonlert has forgiven him and wants Thong Kham to be left under his care.

He said he needed some time before he could explain his sincere intentions and the claim of Boonlert forgiving him to police. If all goes well, he said, he will even spend some time as a monk.