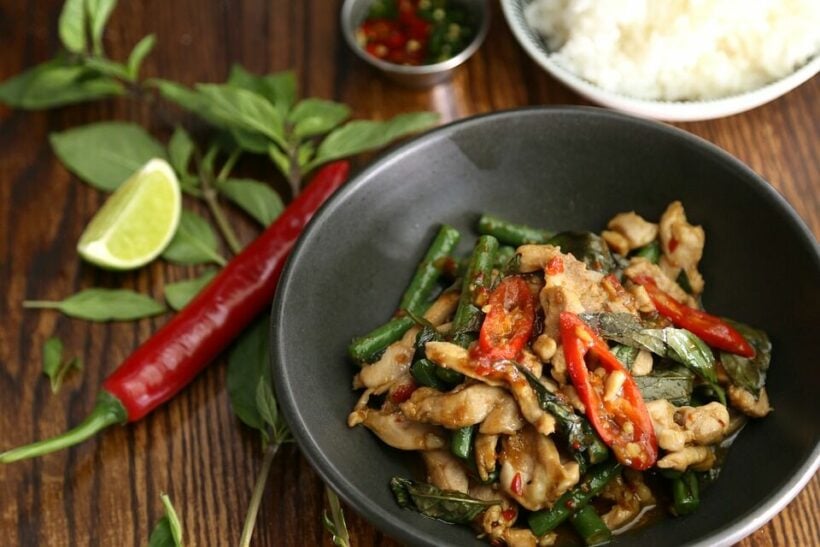 Thai food is raved about as one the best cuisines in the world… and the spiciest. The small red and green Thai chillies are typically what gives the dishes that extra kick, while dried chilli flakes and chilli paste, known as nam prik pao, are often served on the side to make the dishes even spicier.

While some foreigners come to Thailand with a palate prepared for spicy food, others can’t handle the heat and Thais will typically lessen the spice level for visitors, calling it “phet farang,” a more mild spice level for foreigners. Some restaurants and street food vendors may ask “Gin phet dai mai?” meaning “Can you eat spicy food?” For yes, say “dai,” and for no, say “mai dai.”

The spice level for many dishes can vary depending on the number of chilli peppers. Many spicy Thai dishes come with a side of cucumbers and other herbs and fresh vegetables to help bring down the heat.

We’ve come up with a list of the top 16 spiciest Thai dishes. Can you handle the heat?

Even some Thais don’t try this dish, so be warned. Kaeng Tai Pla is one of the most well-known local dishes in the south of Thailand and one of the spiciest Thai meals.

Kaeng Tai Pla is known for its combination of salty, hot and spicy flavors. The main ingredient is the fish entrails that are fermented with salt for around a month before it’s cooked. A special chilli paste is made specifically for the dish from garlic, shallots, white peppers, black peppers, dried chillies, kaffir lime vest, lemongrass and turmeric. The curry is typically served with a side of rice or rice noodles as well as a large plate of fresh vegetables to help with the heat. 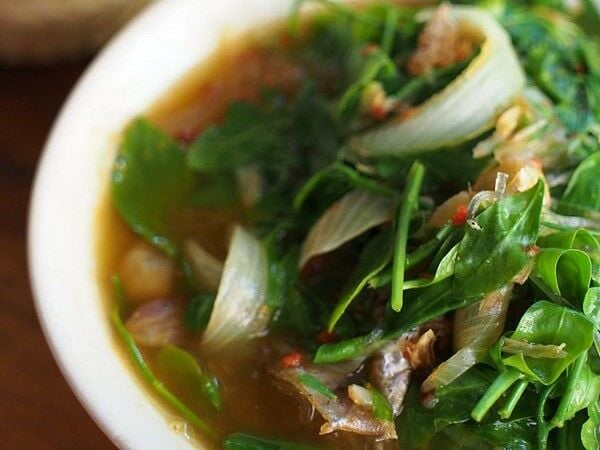 Kaeng pa, which means “jungle curry,” is a watery, hot and flavourful curry. There’s no coconut milk added to cool it down, so be warned. It’s one of Thailand’s spiciest curries. It’s made with kaffir lime peel and leaves, lemongrass, green peppercorns, galangal, garlic and chilli. Traditional Kaeng pa was made with wild boar, but today, the curry is typically made with pork, chicken or fish. 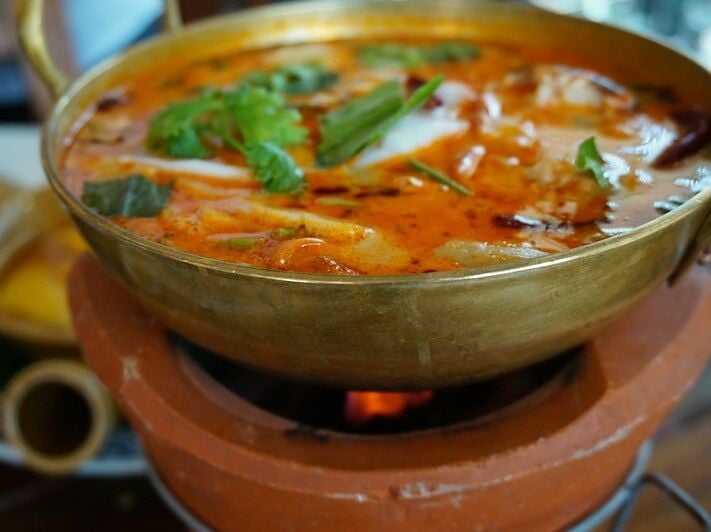 Tom Yum is one of the most well known Thai foods. The spicy soup, known for its herbal flavors, is made from lemongrass, kaffir lime leaves, galangal, tamarind, chillis, mushrooms and coriander. It’s typically made with shrimp or a large prawn (tom yum goong), but can also be made with chicken (tom yum gai.)  Coconut milk is often added to the soup, which lowers the level of spiciness and sweetens the flavour. To make it extra spicy, ask for the clear tom yum without coconut milk called tom yum nam sai. 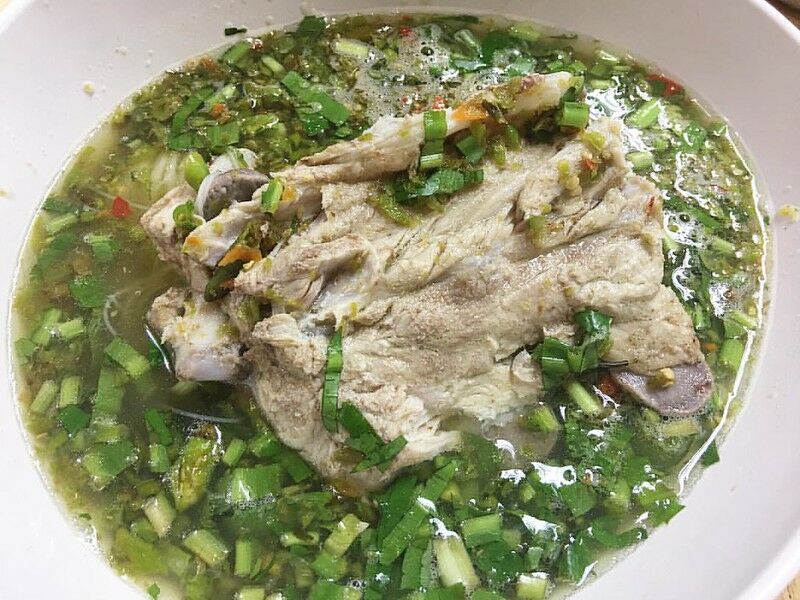 Leng Sab is a simple, but spicy dish and is very popular among Thais. It has a similar taste to Tom Yum, but has a sharper tanginess and a unique aroma from the green chillis. The dish is usually served hot with a large piece of well-boiled, soft pork neck in a flavorful broth. Lime juice and green chillies are added in to give a tanginess and heat. It’s garnished with coriander and spring onions. It’s typically served with a side of rice. 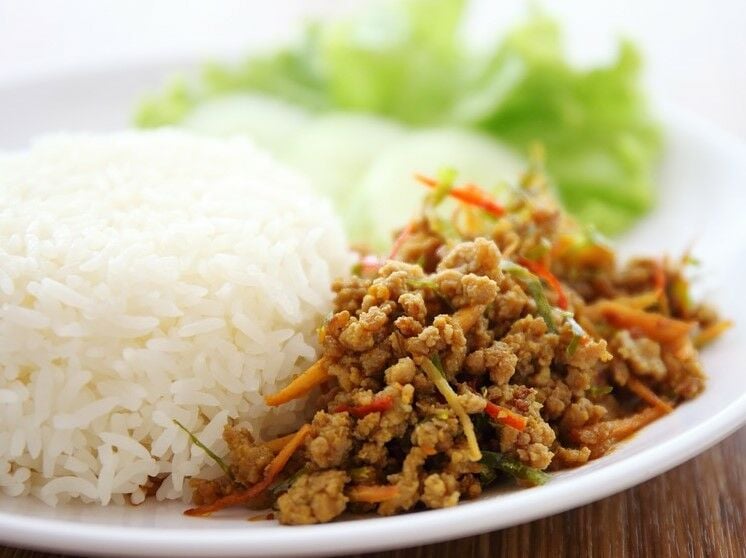 Kua Kling is a famous stir-fried dish from Southern Thailand. Typically made with minced pork, Kua Kling has salty and spicy flavours as well as aromatic notes of various herbs and spices. It’s less spicy than Kaeng Tai Pla, but still extremely spicy. The dish can be served with rice and fresh vegetables like cucumber, Thai eggplant and other greens to help with the heat. 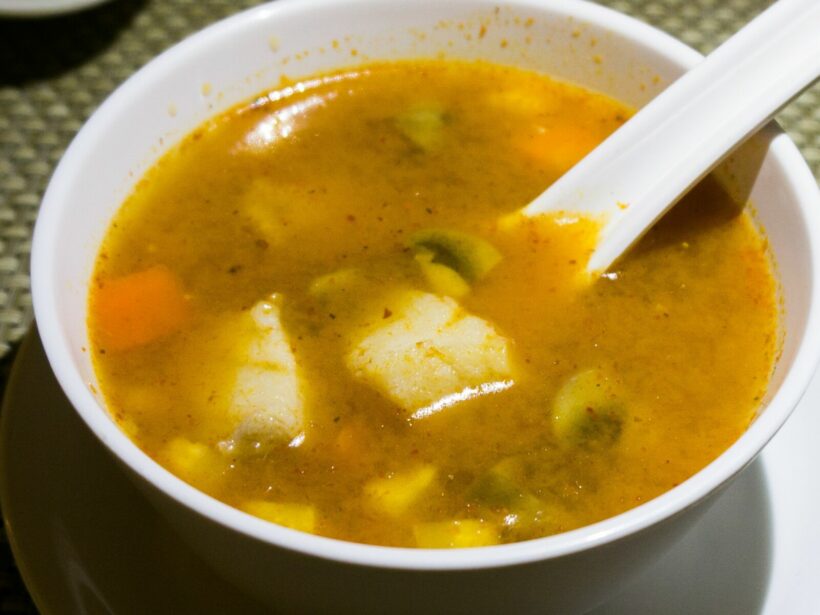 Kaeng Som, which translates to “orange curry,” is a southern-style curry known for its salty, sour and spicy tastes. It’s made from a combination of herbs and spices, and seasoned with shrimp paste, salt and lime juice. People usually add fish as well as bamboo and coconut shoots to the curry. Sides of a Thai-style omelet and a deep fried fish go well with the curry. 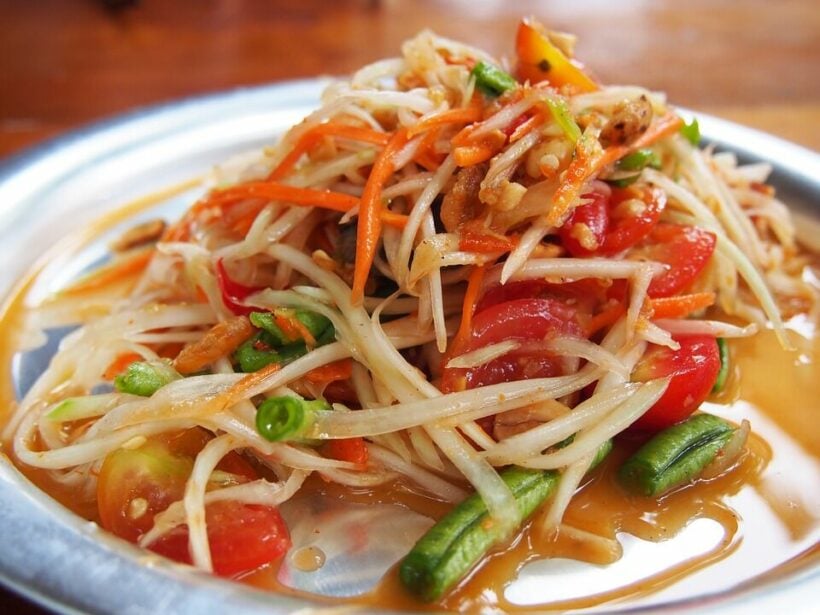 Som tum is one of the most famous Thai foods and is a “must try” dish when visiting Thailand. Som tum is made from shredded unripe papaya, tomatoes, asparagus beans, lime, dried shrimp, chilli peppers, palm sugar and fish sauce.

Typically, a som tum vendor will ask how many chillies you’d like. “Mai sai prik” means “no chilli,” but let’s be honest, som tum without chilli is not real som tum. Around 3 or 4 chillies is normal, but very spicy. Some add 10 or more chillies. The salad goes well with sticky rice and grilled chicken, known in Thai as “gai yang.”

There’s also other variations of som tum, such as som tum pon la mai which is a fruit verison of the recipe with apple, tomato and corn in the same spicy seasoning as the original. There’s also som tum pu pla ra which has raw crab and fermented fish sauce. 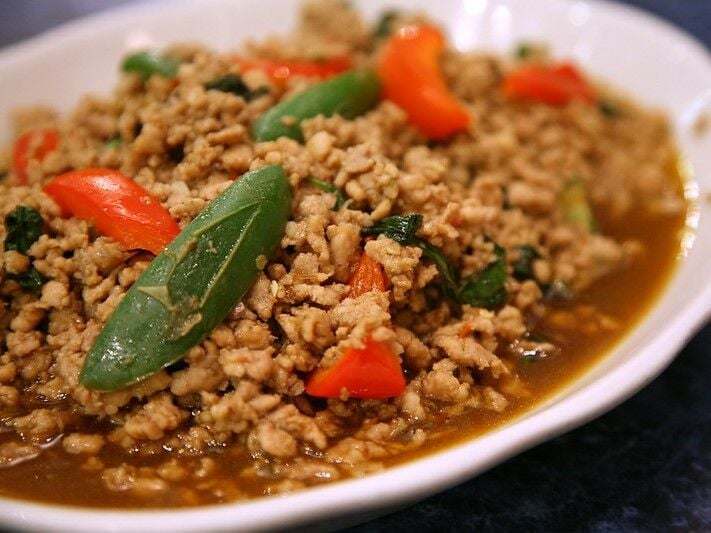 Phad kaphrao is one of the most popular dishes in Thailand. The simple stir-fried dish is made with meat, typically chicken or pork, with chilli, garlic and holy basil. Some pad kaphrao dishes are made with shrimp, squid or crispy pork. It’s served with a side of steamed rice, which helps to minimize the heat. It also pairs well with a fried egg, or “khai dao” in Thai. 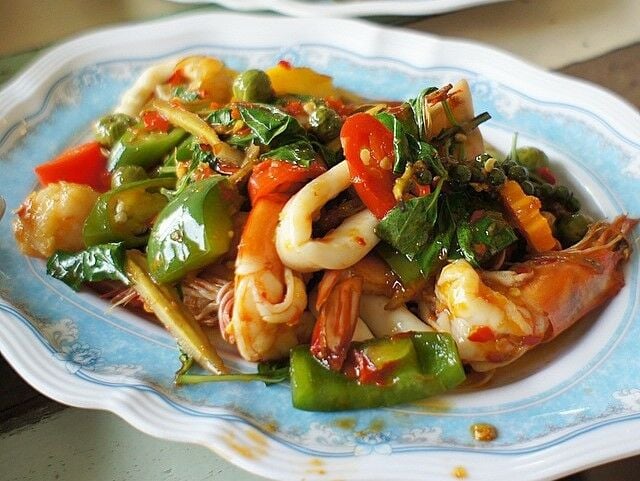 Phad chaa talay is packed with a variety of herbs and spices, giving it a unique flavour combination, and of course, heat. This spicy dish is made with a variety of seafood like squid and prawns cooked with chilli, kaffir lime leaves, green peppercorn and fingerroot. The dish is sometimes made with pork, chicken or fish. It’s usually eaten with a side of rice. 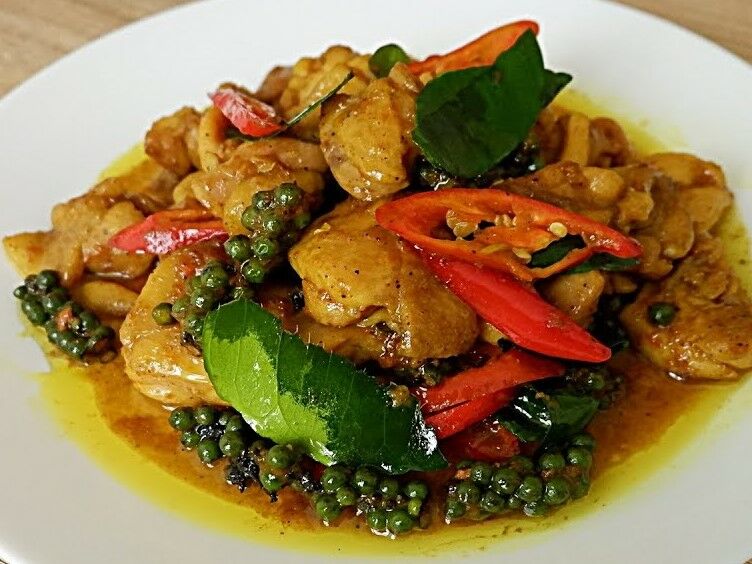 Khai phad khamin is a spicy dish with rich flavours of Thai herbs and spices. Turmeric is the dish a bold yellow. A paste for the dish is made with turmeric, garlic and black pepper. It’s garnished with chillies and kaffir lime leaves. While it’s not as spicy as some Thai dishes, the turmeric and black pepper are sure to make you sweat. 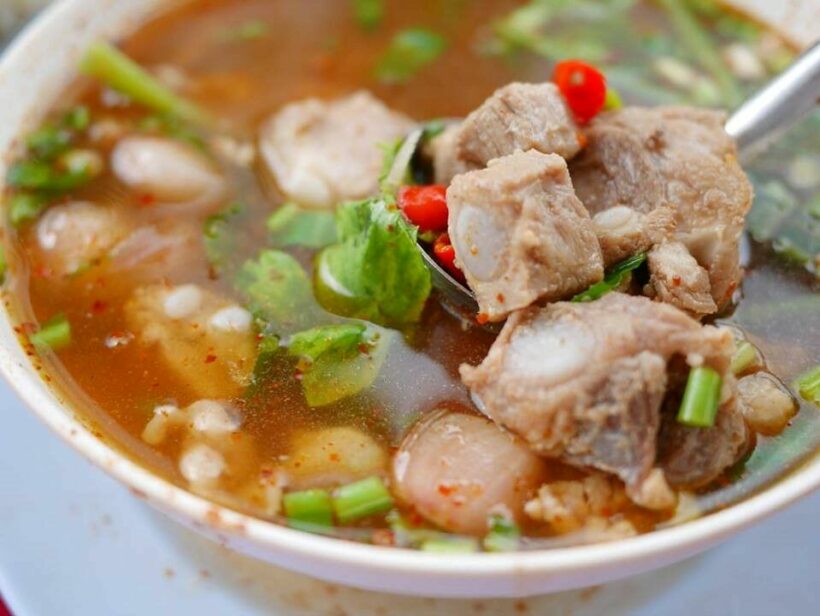 Tom sab kradook is based with the same ingredients as tom yum (lemongrass, kaffir lime leaves, galangal, chilli and coriander) but is added with deep-fried dry chilli. It has the spicy and sour taste of tom yum with a smokiness from the deep-fried chillies. Pork cartilage is a popular meat for the dish. The soup is normally accompanied with rice. 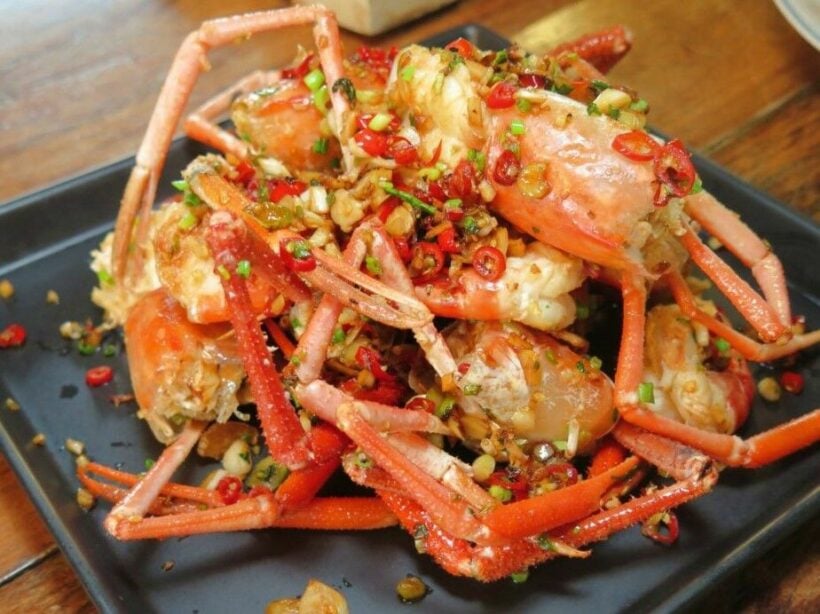 Gung kau phrik klua is a simple dish often offered at Thai restaurants. It’s stir-fried shrimp with 2 main seasonings: chilli and salt. A pinch of pepper and some fish sauce are also added to enhance the natural sweetness of the shrimp. It goes nicely with a bowl of rice. 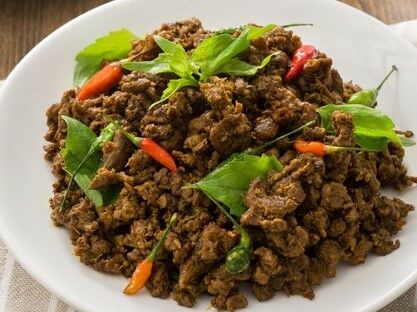 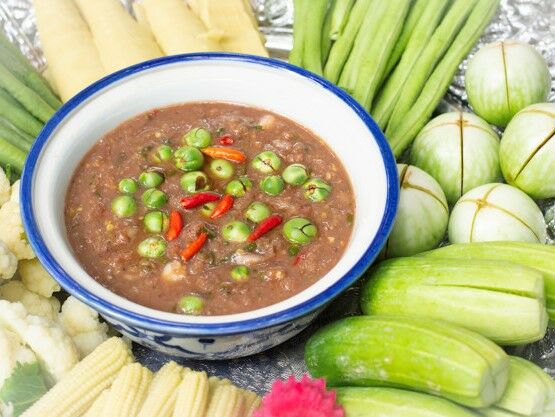 Nam phrik kapi is the staple chilli dip of Central Thailand. The dip is a savoury combination of salty, tangy and spicy. Shrimp paste gives the dominant salty favour. Chillies, garlic, shallot, lime juice and palm sugar are mixed in. The dip is typically served with deep-fried mackerel, steamed vegetables and rice. 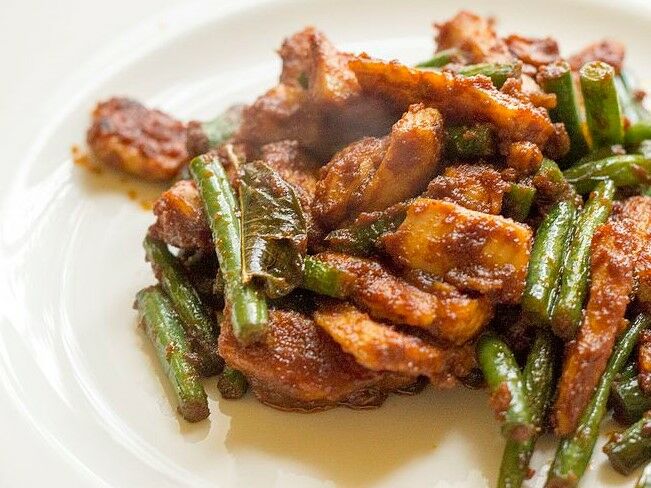 Pad phrik khing is a more mild spice level than some of Thailand’s spiciest dishes. The stir-fried dish can be made with different kinds of meat, like seafood, pork or chicken as well as green beans. Red curry paste, ginger and kaffir lime leaves make up a unique flavour. A salted egg goes well with the dish. 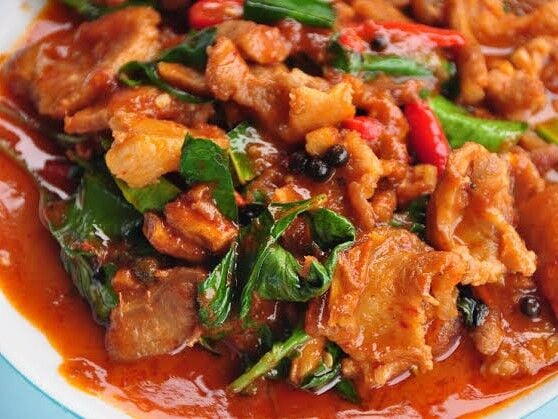 Mu phad phrik phao is stir-fried pork with roasted chilli paste, which gives the dish a hint of sweetness and sourness. Sweet basil is often added. Some use other types of meat like chicken, crispy pork or fish. It’s best with a bowl of rice.