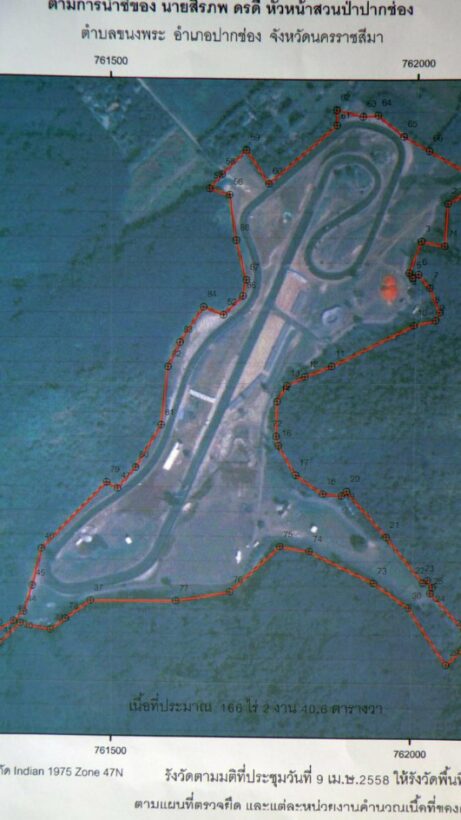 Police have now decided to press charges against three executives of Bonanza International Speedway, the first firm to fall under the probe.

He expected police investigators to conclude the investigation into Bonanza International Speedway soon and forward the case to public prosecutors by early May.

Gen Tanet said solid evidence suggested Bonanza International Speedway had encroached on more than 100 rai of forestland, agricultural-reform land, and public waterways. Land right documents held by the firm, which covers more than 57 rai of land, are also found to have illegitimately issued.

An investigation team at the Justice Ministry, meanwhile, revealed that Kirimaya Resort clearly sat in forestland and such plots by laws could not be issued any land-rights documents.

The source said agents, however, had used local villagers’ names in the Pak Chong to claim occupation over these land plots for five years before seeking land-rights documents – which were finally sold to Khaoyai National Park Co Ltd.

According to this source, the firm had Rakesh Saxena as its adviser. Saxena was back then also an adviser to Bangkok Bank of Commerce (BBC), which agreed to take these land-rights documents as collateral. Hit by embezzlements, BBC later collapsed and such collateral assets were forwarded to the Legal Execution Department for auctions.

Mr Saxena has received a jail term for his role in the embezzlements.

During the past week, words spread that Kirimaya Resort had acquired these plots through an auction held by the department.

The department’s director-general, Ruenvadee Suwanmongkol, however, said records did not show Kirimaya as the buyer.

“Those land-rights documents go to Roykaew Co Ltd,” she said.

She explained that her department had sold those land plots in response to a court order and based on the fact that these plots were accompanied by land-rights documents issued by the Lands Department.

“But the buyer can sue for compensation if these land-rights documents is found to have been issued illegitimately,” she said.

A source at the Justice Ministry said the land-rights documents from the auction covered just some 700 rai but aerial pictures showed Kirimaya Resort must have spanned over 1,400 rai of land. “We will investigate further,” the source added.

“Structures on his plot are not very big,” Col Sommai said, “But interestingly, a public waterway behind his house there has been modified. We have to find out who has made the modification, Mr Sorrayuth or the project’s owner”.

According to Col Sommai, a dyke is made at the waterway and this means if water level runs low, not a single drop will head to Lam Takhong River.

“So, the investigation will have to focus on not just how the land rights documents are acquired but also who has modified the public waterway,” Col Sommai said.