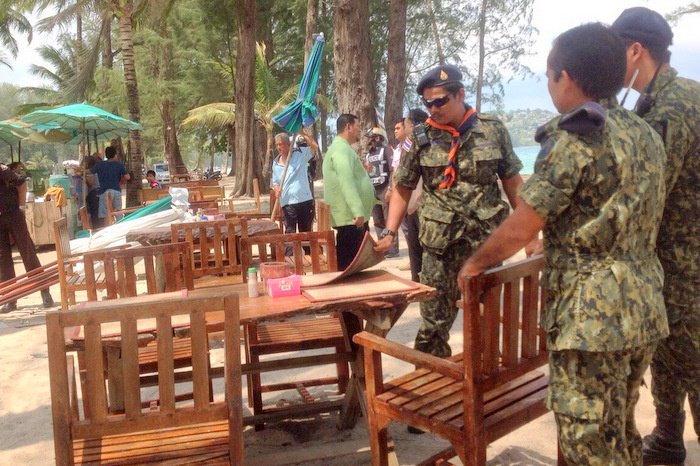 PHUKET: Police have been tasked with pursuing beach encroachment charges after a team of officials cleared a restaurant’s tables and chairs from the sand at Bang Tao Beach on Tuesday morning.

“We seized six wooden tables, 18 wooden chairs and 10 umbrellas. All items are now being kept at the offices of the Cherng Talay OrBorTor,” Mr Veera said.

“As the owner of the business was not present at the time of the raid, the case was handed over to Cherng Talay Police for further investigation under a public area encroachment charge.”

“He wants everyone to keep a close eye on beach vendors and enforce the beach-management policy,” Mr Veera said.

Governor Nisit told the Phuket Gazette that he wanted to be tough on encroachers, but soft on tourists.

“Vendors must follow the rules, or they will be arrested and charged with encroaching on the beach,” he told the Gazette yesterday.

“But we have also asked for help from hotel business operators to inform tourists of the beach rules. If tourists are found breaking the rules, I have ordered the police to warn them, rather than seize their belongings.

“We will play hard with the vendors, but softly with tourists.”