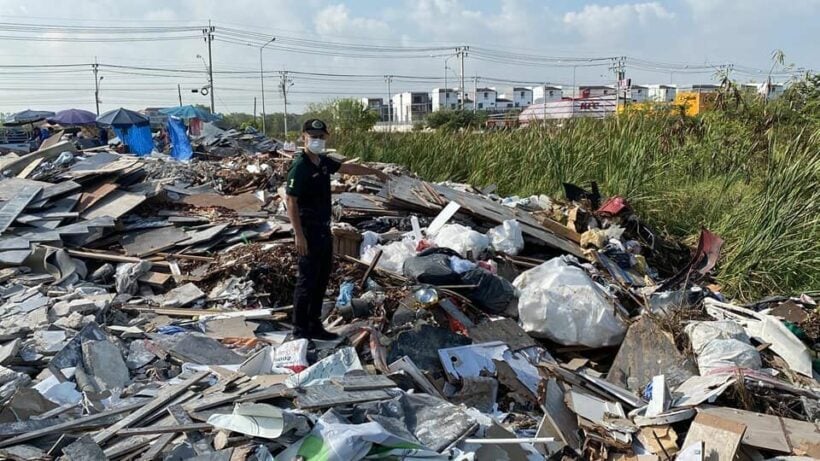 The Thai government is launching a project to get rid of illegal landfills in Bangkok. The “SHUT DOWN!” project is led by Bangkok’s Natural Resources and Environmental Crime Suppression Division, also known as Greencrop. So far, two of the more than 20 illegal landfills were raided in the operation.

A report in Thai media says the dumps were in Bangkok’s Latkrabang district and were run by 49 year old Salai and 41 year old Tawee. They have been charged for turning land into landfills without permission. Salai confessed that she has been opening illegal landfills for two years. She will agree with the landowner and open for residents to leave their trash and pay for the charge at around 40 baht to 300 baht per time. Once the area is filled with trash, she planned to cover it with soil and sell or rent out the land.

Another suspect, Tawee, reportedly told the authorities that he has been operating illegal landfills in various locations in the city for over seven years. He was just charged in November 2021, but he found a new place and resumed his illegal dumping business.

Mana Kleepsattabut, the Commander of the NED, shared that there are over 23 illegal landfills in Bangkok spreading in each district, including three in Min Buri, one in Suan Luang, two in Latkrabang, one in Taling Chan, two in Prawet, three in Klong Sam Wa, five in Saphan Sounng, one in Sai Mai, and one in Phasi Charoen.

He added that there had been many complaints about pollution and the smell of garbage, which come from inappropriate garbage disposal and management. Other than that, the dirty water from that garbage can go to the water and soil around the area, leading to health problems. The commander also warns all business owners, especially in the real estate industry, to be careful when buying land that may have been used as an illegal dump.

Jason
Wether or not this is a good initiative...time will tell.... the ideal is commendable!

Ted
As I see it; will only be a good initiative, if options are given to those who want to recycle their trash. And as people already use this 20 landfills, wouldn't it be smarter to regulate them to become modern…
Cathat
"where there's muck there's brass" Probably a very lucrative business model!

Guest1
Bangkok officials to shut down more than 20 illegal landfills in the capital And let me guess: They will cover it with soil? Or will they clean them up? 5 hours ago, Ted said: As I see it; will only be…