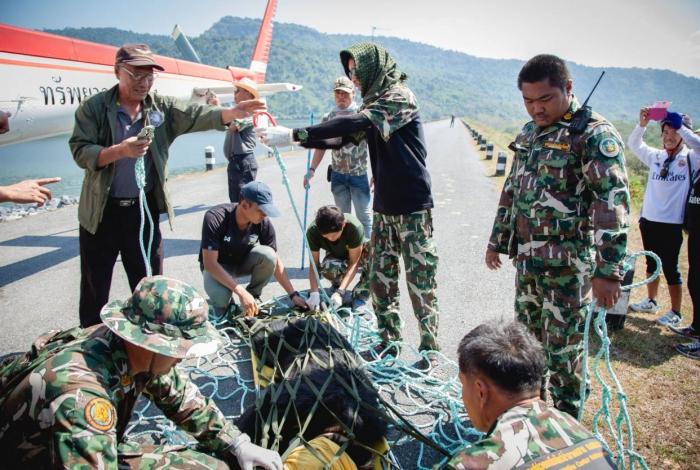 THAILAND: A member of the team responsible for sending an Asian black bear back into nature said yesterday that the animal’s fatal plunge from a helicopter was an “unavoidable accident caused by sudden turbulent weather”.

Thanatip Chaiyos, a volunteer photographer, was part of a mission to move the five-year-old bear back to the forest, which ended tragically last month, sparking criticism from wildlife activists (story here).

The bear had been found wandering into villagers’ houses and eating their crops, so a team of vets and park officials, including Mr Thanatip, captured the bear near Wangmuang Waterfall in Pakplee District, Nakhon Nayok.

Over the following weeks, the animal was cared for and received regular medical check-ups in preparation for its return to the forest. It was also fitted with a collar and tag to enable further monitoring.

“The authorities involved decided to transfer the bear back to the deep forest to prevent it from wandering out again and a helicopter was seen to be the most suitable choice of transport,” Mr Thanatip said.

He said that the route could take them hundreds of kilometers deep into the forest, and that if a car were used there would be the danger that the tranquilized bear would wake up along the way.

“This was not the first time that we had transported animals by helicopter,” he confirmed.

On the day of the accident, the sedated bear was put in a net suspended from a hook under the helicopter.

Mr Thanatip said that the helicopter hit air turbulence near Nangrong Waterfall, causing it to swing back and forth. The weight of the bear worsened the swinging of the aircraft, making it more difficult for the pilot to control it.

“The chopper swung for a while and I saw something fall down. When the pilot landed the aircraft we saw that the net with the bear inside had disappeared. Examining the hook, they also found that it had come loose, which is possibly how the bear fell,” he said.

Mr Thanatip said no one could have predicted the sudden change in weather and that the bear’s death was a ‘tragic accident’.

He added that the operation had been well-prepared and planned carefully. “No one wants an incident like this to happen,” Thanatip said.

Thongchai Saengprathum, secretary of the Khao Yai Foundation, strongly criticized park officials for allowing the bear to fall to its death, adding that the people concerned should face legal action for their negligence.

Some reports had claimed that the bear woke up in mid-air, and that as the helicopter flew over forestland the animal panicked and fell to its death.

Mr Thongchai said the accident could have been avoided as Khao Yai National Park had been a role model for other parks in its handling of rescued wild animals.

Meanwhile, the National Parks and Wildlife Department has set up a panel to investigate the accident.