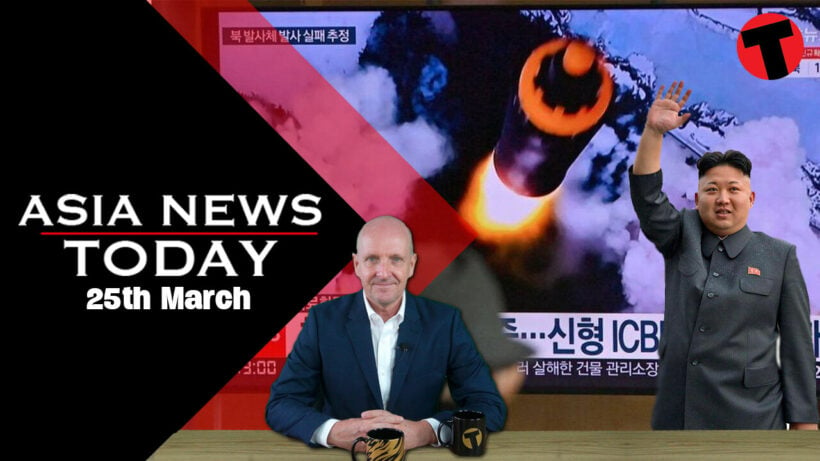 North Korea has fired its first intercontinental ballistic missile in more than four years. Well, that’s what Japan’s defence ministry is calling it. The suspected ICBM flew to an altitude of 6,000 kilometres and a distance of just over 1000 kilometres, flying around 70 minutes before splashing down in waters off Japan’s western coast yesterday. The provocative test is North Korea’s 11th for this year, the last one on March 16 which appeared to have failed just after launch. Analysts are saying that yesterday’s test could be the longest-range missile yet fired by North Korea. Japan’s Vice Defense Minister the missile’s high altitude suggests it is a “new type of ICBM”, and a problematic sign that North Korea is closer to developing weapons capable of reaching as far as the US. The US has now joined its allies South Korea and Japan in strongly condemning the launch the test and is calling on North Korea to refrain from further testing and destabilising the region. According to analysts, the recent spate of North Korean missile tests suggests the country’s leader, Kim Jong Un, is attempting to show that Pyongyang remains a player in the struggle for power and influence, especially in the region where it borders China, South Korea and Russia.

A human rights group is accusing Myanmar’s military chief of creating a special gang of snipers to target unarmed protestors. The Scholl Center and Fortify Rights say the special militia was formed to quell targeted protest groups and create a climate of fear. The report is titled “Nowhere is Safe”.In preparing the report, the groups investigated leaked documents and 128 testimonies from survivors, medics, witnesses and other former military and police, on the year of violence in Myanmar since the coup that ousted the elected government. The researchers say they had access to verified internal memos to Burmese police ordering them to arbitrarily arrest protesters, activists and members of the previous ruling political party. The report identifies 61 military and police commanders who, the report demands, should be investigated for crimes against humanity. The report alleges that at least six of these people are currently serving military or police, including a colonel and two majors. The report also alleges that the Burmese junta chief personally set up the elite sniper squad and was run by four of his top generals. Fortify Rights is an NGO based in Southeast Asia, and funded by donations from Europe, Asia and the US.

Singapore says they’re set to end most of its Covid-19 restrictions starting as early as next Tuesday as the island nation evolves from a pandemic to an endemic response. The Singaporean PM says the change is part of Singapore learning to live with Covid, instead of trying to eliminate it. He said yesterday…. Our fight against COVID-19 has reached a major turning point. We will be making a decisive move towards living with COVID-19.”PM Lee says Singapore will remove its outdoor mask mandates, social gathering limits will increase from 5 to 10 people, large event capacity limits will be increased, and more people will be encouraged to return to their offices. But face mask wearing will still be required indoors. Travel restrictions are also being heavily modified… starting April 1, vaccinated travellers will be able to enter Singapore without quarantine and the Covid test on-arrival will also be scrapped. Pre-travel tests will also be removed for people entering at land borders, but will still be required for those entering by air or sea.PM Lee encouraged people to go back to living ‘normal lives’ but also warned Singaporeans “not throw all caution to the wind”.

Floating “bricks” have been found floating off northern Philippine waters. But the bricks were found to be compressed cocaine. Filipino anti-narcotics agents claim that at least five of the rather expensive bricks, with an estimated street value around US$570,000 each, were found by local fishermen floating off the waters off Cagayan province. All the bricks were found wrapped in sealed plastics including copious amounts of packaging tape and black rubber, bearing the logo of a Colombian football team. Lab tests have now confirmed the initial suspicion that the packs were high-grade cocaine. But it’s not the first time loose packages of cocaine have been found by fishermen in Filipino waters. In 2019, cocaine bricks valued at around US$20 million, were found by fishermen in three separate incidents.

US electric vehicle manufacturer Tesla is not going ahead with a factory in Indonesia as negotiations with the government failed over, among other things, terms relating to the supply of raw material to make power generators and storage batteries. Senior Indonesian officials had earlier said that Tesla was keen on setting up a plant to manufacture energy storage systems. Tesla currently has factories building components in the US, China, Germany and Canada.

Following news that Thailand has now outlawed the use of cryptocurrencies to pay for goods and services, but still allowing trading, central banks in several Southeast Asian countries say they are now are exploring the use of digital currencies to improve payments efficiency and encourage start-ups and e-commerce in the region. Benedicte Nolens, heads the Hong Kong centre of the Bank for International Settlements Innovation Hub says that Southeast Asia has seen a lot of digital payment and e-commerce start-ups Hong Kong Monetary Authority, the city’s de facto central bank, has also been working with the People’s Bank of China and counterparts in Thailand and the UAR on a project called “bridge” to establish a digital settlement platform. And in Singapore, the central bank there has teamed up with central banks in Australia, Malaysia and South Africa to explore “Project Dunbar” which will develop platforms for cross-border settlement of different digital currencies.

Drunk man stabs sister to death in argument over his drinking, Chon Buri