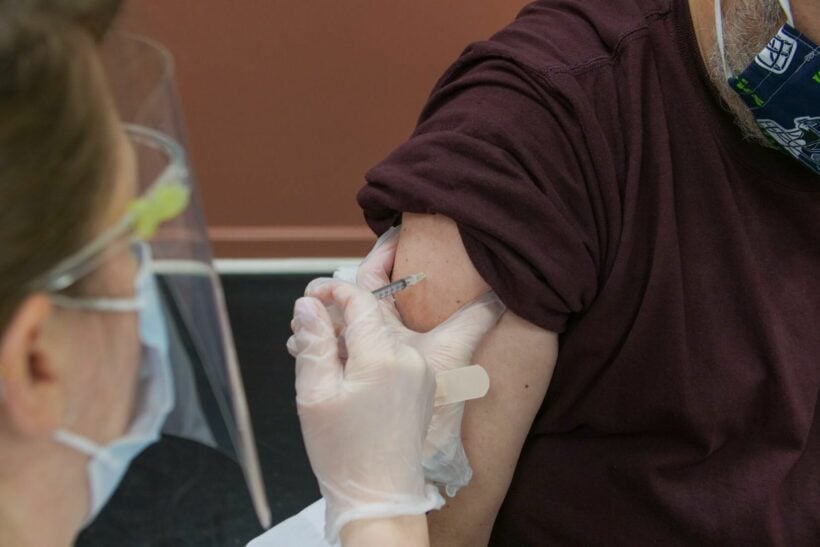 Some Americans in Thailand are still pushing the US government to supply Covid-19 vaccines to those living overseas. Democrats Abroad Thailand is now calling on American expats to contact senators and urge them to support the allocation of vaccines to citizens overseas. The expat group’s Covid-19 Vaccine Task Force is also set to hold a Zoom meeting tomorrow evening to discuss the call to action.

Last week, the Embassy of the US in Thailand Charge d’Affaires released a statement saying the US Department of State is “unable” to provide vaccines for the millions of Americans who reside outside of the country.

Following the news, 26 US senators signed a letter to Secretary of State Antony Blinken urging that the around 9 million Americans living abroad be included in the government’s global effort.

… the United States is leading the world by announcing the donation of more than 500 million vaccines overseas. In addition to this important effort, we urge you to take concrete steps toward vaccinating the nine million Americans living abroad.

The US government is donating 500 million vaccine doses to 92 low to lower middle income countries, including Thailand. In the letter, the senators urged Blinken to donate supplemental doses to US embassies and consulates in those countries to vaccinate American citizens.

To optimize distribution of those additional doses, we urge you to prioritize countries where Americans are deemed ineligible or low priority in national vaccination deployment plans as well as countries that presently are not distributing a U.S. Food and Drug Administration authorized vaccine or vaccine authorized by the World Health Organization.

Democrats Abroad Thailand is calling on American expats to write or call their senators before July 4, urging them to join the initiative. The following statement is suggested…

“I am your constituent currently living in Thailand where foreigners do not have access to US FDA-approved Covid-19 vaccines. I would urge you to sign the letter that Senators Murphy and Moran sent on June 24 to Secretary of State Blinken asking him to “take concrete steps toward vaccinating the nine million Americans living abroad.”

In recent months, American expat groups have pushed for the US government to provide vaccines to citizens in Thailand. Representatives from Democrats Abroad Thailand, Republicans Overseas Thailand, American Women’s Club of Thailand, and Veterans of Foreign Wars have collaborated on statements to US government officials, pushing for citizens living in Thailand to be included in global vaccination efforts.

Stonker
1 hour ago, TobyAndrews said: Yes well let us take this simple point which you omitted. You stated  "SiamBioscience  has never produced a vaccine and has apparently to produce one dose commercially" It is up there above in your post. Yet…
Stonker
3 minutes ago, Stardust said: You even doesnt know that the visa system is complete different than Thailand! Of course it's completely different. That's the whole point I'm making, which you've obviously missed.   7 minutes ago, Stardust said: We have only…
Stonker
59 minutes ago, Stardust said: Every Thai who live or work in Thailand get a healthinsurance and social security and thats by the law of Germany. Sorry, I'd missed this pearl of wisdom, whatever it means!?
Stonker
1 hour ago, Stardust said: Rubbish Thais get social security and health insurance and the title but not by a visa they apply in Europe. Or they have a employer and then get all rights like every european including health…
Stonker
2 hours ago, TobyAndrews said: WRONG. Thais have a long list of rights to be treated by the NHS, even if they are only visiting. For instance break a leg in Thailand - the Thais will be galloping to treat you…