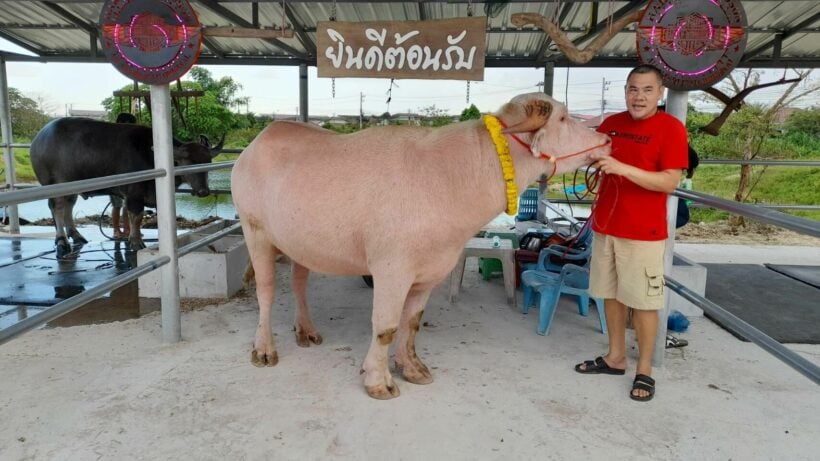 A rare albino water buffalo has been sold for a whopping 2.5 million baht. Two proud new owners of buffalo named Duangphet travelled to the 10th Uthai Thani Buffalo Festival to receive the animal and bring it to its new home at Harley Buffalo Farm in Chon Buri. The two buffalo enthusiasts said they bought the albino buffalo for breeding so they could help expand the numbers of this special kind of water buffalo.

Duangphet’s previous owner from Tik Kwai Thai house in Kamphaeng Phet province has received even higher offers for the animal, a two year old male albino water buffalo, but chose Chaiyong and Amarin from Harley Farm because of their good intentions.

Chaiyong and Amarin have a passion for the conservation of water buffaloes and they are determined to breed Duangphet to grow numbers of albino water buffaloes. As soon as the pair saw Duangphet for the first time, they thought he was beautiful and knew they wanted to buy him, they said.

Harley Farm engaged in negotiations with Tik Kwai Thai house for around one month before they agreed to sell Duangphet for 2.5 million baht, which Chaiyon and Amarin paid in cash at the 10th Uthai Thani Buffalo festival. The partners from Harley Farm have promised to take good care of Duangphet.

A regular adult water buffalo, used for centuries by Thai farmers to plough rice fields, sells for around 50,000 baht, which varies according to breed and size. 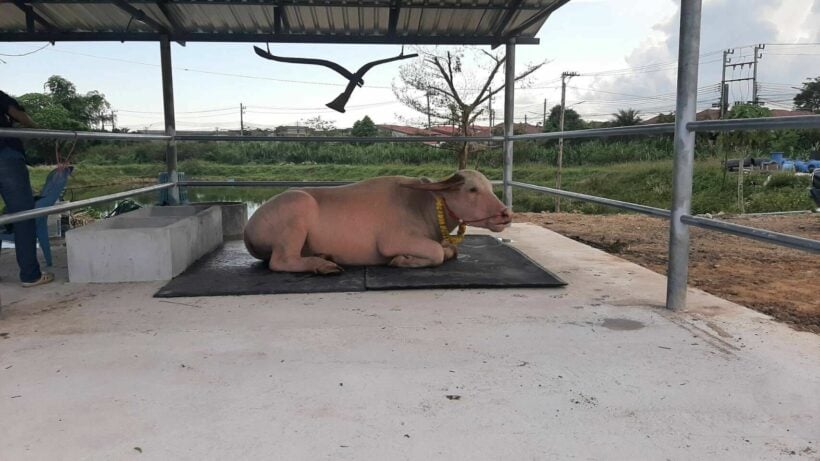 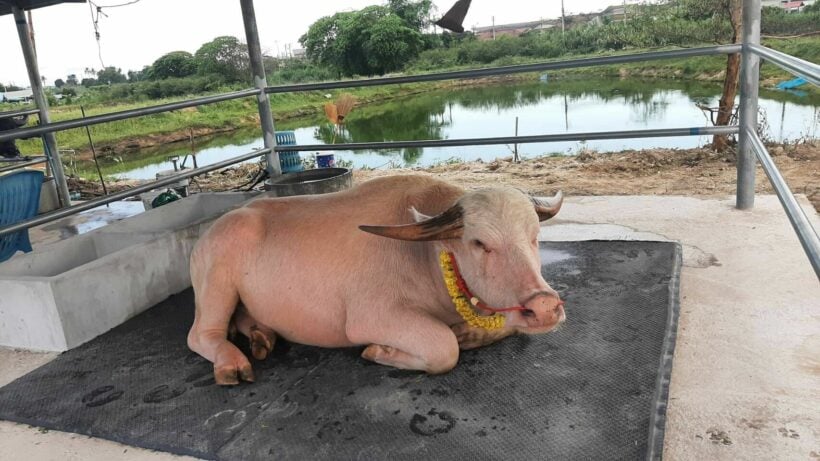 JackMeOff
Buyer was smart buying white buffalo for 2.5 million baht. Buyer can find other people with similar intelligence and sell them one day's worth of white buffalo poop for 100,000 baht.
Cathat
2.5 mill cash. wonder how much more he has stashed under the mattress. yet another poor farmer.

DoUKnowWhoIAm
15 hours ago, Thaiger said: albino water buffalo Yes, the falang buffaloes are cash cows...
PohTou
15 hours ago, Lifeboat said: Um, so it's white and therefore worth millions just because of that fact? Wow! The intelligence is just on another level. I hope the ones who made millions on what normally is 50k thb laugh…

Deadline to apply for “Covid” visa extension now May 24, immigration gets stricter