With hundreds of millions of users globally, Twitter is many things to many people. Amongst Thailand’s growing Twitter community, it’s interesting to see how users are evolving the way they use Twitter. Trending topics change rapidly as Thai users jump from one hot topic to another, while favourite celebrities and musicians remain relatively consistent.

Below are just four ways Thais are using Twitter, which one are you?

Keep Up-To-Date with the Latest Trends

Top trending hashtags are one in many ways users can see and follow the latest conversations, making it as the platform where conversation starts. Whether TV dramas, entertainment, musicians, superstars or events, #WhatsHappening is happening on Twitter.

#Room39 is one of the recent trending entertainment topics which spiked following the split of the Thai boy band, with the conversation also focussed on Isara Kitnitchee (@Tom_Isara) who is leaving the band to follow a solo career. 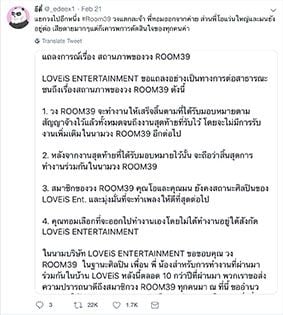 Supergroup BNK48 (@bnk48official) underscored their Thai girl-power announcing the planned release of their sixth single on their official Twitter account which was Retweeted more than 10,000 times and liked over 7,000. #BeginnerTH sent the Thai Twittersphere to new heights going viral in no time at all. 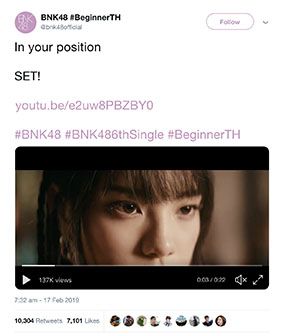 Being an interest-based platform, Twitter allows us to join public conversation in real-time and to connect with a community of people who share same interests.

Sometimes you don’t need to follow an account. Using hashtag brings users into the conversation, making Twitter stand apart from other social platforms, as does the fact that it’s normal on Twitter to follow people you don’t know, yet you have similar interests – it’s all about community!

While Football is big on Twitter on Thailand, the rapid growth of eSports has spawned many communities, mostly centered around hashtags that relate to a game, for example, #rov. RoV’s popularity comes in part from its appearance in the 2018 Asian Games as a demonstration event and expectation it will one of the games selected for the 2020 Asian Games when eSports will be a medal event. 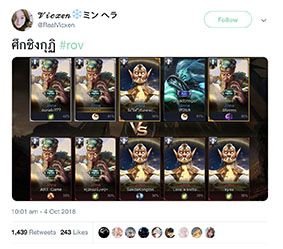 Thai TV generates huge active communities on Twitter with users sharing insights into current and past episodes. Modelling competitions such as The Face Thailand Season 5 (#TheFaceThailand5) have dedicated communities where users rally around their favourite shows and acts, showing their support.

Twitter is a LIVE platform where people share and follow what’s happening around them real time. While Bupaesaniwas was the most Tweeted about Thai TV Drama in 2018 using the hashtag #บุพเพสันนิวาส, Twitter has become the go to platform for Thais to comment on TV dramas as they happen and follow the story online real time. This is a noticeable pattern of how Thais use Twitter to complement their TV and live broadcast experience.

Channel 3 TV’s latest hit soap opera Doctor Thong Ek from Tha Cha Long, has seen high engagement on Twitter as viewers use #หมอยาท่าโฉลง to join in the conversation LIVE during each episode. 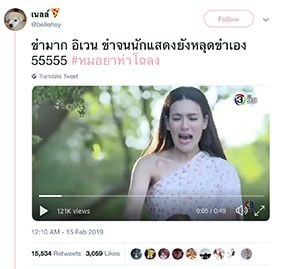 Another area where Twitter brings people together is during live concerts as fans Tweet during their favourite songs and performances. The recent Thai rock band Bodyslam (@bodyslamband) and their #bodyslamfest at Rajamangala Stadium in Bangkok, was the latest Thai concert to take Twitter by storm with fans actively Tweeting throughout.

Journalism has changed and the way we consume news today has been revolutionised by social media. Twitter has become the goto platform in Thailand for breaking news. Topics centre around user-generated hashtags which trend on popularity and users like and Retweet those Threads making it easy for others to follow news stories as they develop.

One of the top news stories so far this year has been about the air pollution in Bangkok. #ฝุ่นPM25 has been Tweeted 4.8 million times (between 17 December 2018 and 24 January 2019) as people Tweeted their experiences and shared important information on areas most polluted in the city. Not only was Twitter the platform for the latest news, but also helped users to know safety levels in areas throughout the city.

Twitter has proven to be an invaluable tool during emergencies and natural disasters. Following the recent earthquake in Lampang, Twitter users came together using the #แผ่นดินไหวลำปาง hashtag. Hashtags are the best way for people to find information and conversations online, and they are used by media, government agencies and relief/volunteer organizations. To ensure that the hashtags remain useful, refrain from using hashtags for unrelated topics.

In today’s fast-paced, fast changing world, Twitter can be your constant. Freely available across all devices, take Twitter with you wherever you go and remain connected to the conversations and people that matter.

You can follow The Thaiger’s Twitter feed HERE. It’s free and sends you all the latest stories.

Flying motorbike ends up stuck in power lines in Surin