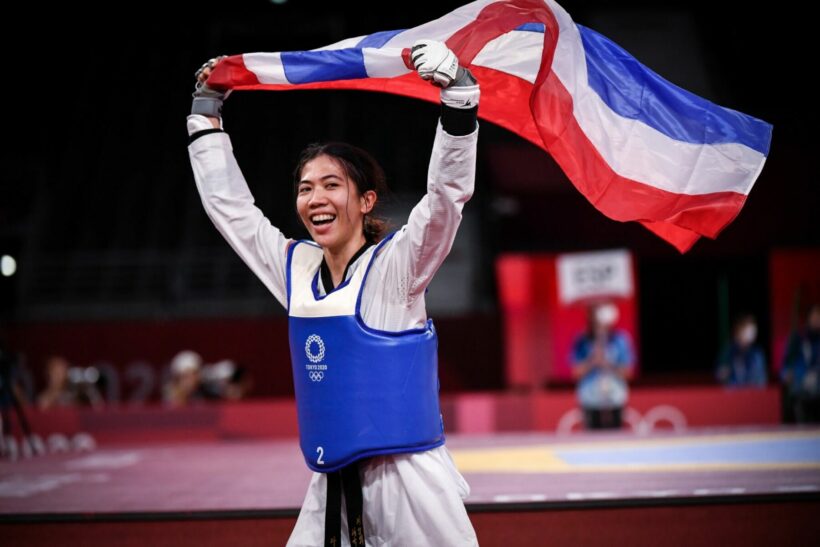 Panipak Wongpattanakit brought home a historic gold medal today – Thailand’s first in the Tokyo 2020 Olympic games, first-ever in taekwondo, and 10th gold medal of all time. The 23 year old has won 2 world championships and is currently ranked number 1 in the world.

She barely edged out her competitor, the current European Championship winner Adriana Cerezo Iglesias from Spain in a last-minute turnaround. With just 11 seconds to go, Panipak was down 1 point, 9-10, until she scored a trunk hit that catapulted her to an 11-10 win. The event was held at Makuhari Messe Convention Centre in Chiba and represented the marking of many Olympic milestones for Thailand, aside from being her first Olympic gold.

Panipak, a Surat Thani native, had picked up her first Olympic medal 5 years ago at the games in Brazil in 2016, which also makes her only the third Thai person in history to win to Olympic medals after a gold and silver in boxing for Manus Boonjamnung in 2004 and 2008, and back to back silver medals for female weightlifter Pimsiri Sirikaew in 2012 and 2016.

For Thailand, this win marks the first Olympic gold outside Thai strong sports of boxing and weightlifting, which brought home 4 and 5 gold medals respectively. This win also breaks the double-digit barrier as Thailand’s 10th gold medal in any Olympic Games. Thailand first won gold in 1996 at the Atlanta Games for boxing and then in 2004 in Athens for women’s weightlifting.

For Panipak, the win marked a new apex in an illustrious career that has seen her winning all major events since 2015’s World Championship, then her 2016 Olympic bronze medal, followed by 3 World Grand Prix crowns in 2017, 2 more in 2018, and another in 2019. At the same time, she won back to back Grand Slam golds in 2018 and 2019 as well as a second World Championship in 2019. It seems only the Covid-19 pandemic slowed her winning streak stopping her from winning this Olympic gold in 2020, delaying it to 2021.

Panipak dedicated her win to all her Thai fans, saying all the hard work and hard times had paid off in achieving her dream. She will return home to Thailand after the weekend and quarantine in Phuket, with not only her Olympic gold medal but a 12 million baht award as per the National Sports Development Fund policy.

gummy
6 hours ago, bushav8r said: He or her.  Either way Thailand can be proud and there will no propaganda involved. How on earth can you say that ? Seems you know very little of the Thai propaganda machine running at maximum…

Smithydog
Firstly, congratulations to the athlete. You bring great pride to yourself, your hard work, your family and to the nation of Thailand. It is likely the athletes from most countries will have to put up with the "adulation" of the…

dmacarelli
Brilliant job. Judos to Panipak. At least she is doing something to uplift her nation, contrary to the extremely toxic leaders and politicians, who are just grinding down the common man daily, doing absolutely nothing to alleviate their suffering and…

Scott
Congratulations for winning the gold medal!  This is great and happy news that is definitely needed during these difficult Pandemic times.