They say elephants have exceptional memories, and today one proved that true by finding his way back to a familiar place. Perhaps Thailand’s most memed elephant, Phlai Boonchuay, has returned to the home he infamously broke into just one month ago to search for more food. The wild elephant went viral around the world when he broke down the kitchen wall of a family home in Prachuap Khiri Khan to grab a bite to eat.

In a cartoon moment, the hungry elephant once again returned to the scene of the crime and burst through the kitchen wall that was just newly repaired after his last smashing visit. Just like last time, he didn’t try to enter the house but merely rooted around the kitchen in search of some snacks or perhaps some leftovers to eat.

The owner of the house posted a 5-minute video to Facebook starting with Phlai Boonchuay smashing out a hunk of the new wall. The house, in Chalerm Phrakiat Pattana village, had previously been visited by the same elephant on June 20 and crashed through the very same wall. The photo of him peeking through the destroyed wall went viral and embassies in Thailand, as well as businesses like Burger King, were quick to meme the photo into advertisements. 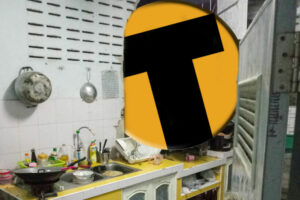 We would never stoop that low.

The peckish pachyderm managed to grab some instant noodles, a pack of flour, and some cooking oil from a food container. His snooping around did knock kitchenware all over the floor, the noise from which woke the family up. The family was surprised to see a familiar face and trunk rustling around and took a few photos before trying to persuade him to leave. They then alerted park officials at the Kaeng Krachan National Park the house is near that the same elephant had knocked down the same wall.

The Third Conservation Area Administration Office in Phetchaburi, whose job it is to drive wild elephants back into the forest, was notified of the mischievous elephant’s visit. Soldiers and local officials including some from the national park and the Wildlife Conservation Society Thailand helped repair the kitchen wall last time and vowed to do it again after this visit from the hungry elephant.

Martin
Instant noodles, flour, cooking oil. He's no mug this elephant, makes sure he gets some staples. Will probably be back tomorrow as he forgot to get rice ?

gummy
Wait till the elephant decides to go to the toilet to take a dump, then they will be in real shit
HolyCowCm
Happening all around the world with animals. Mostly loss of territory.