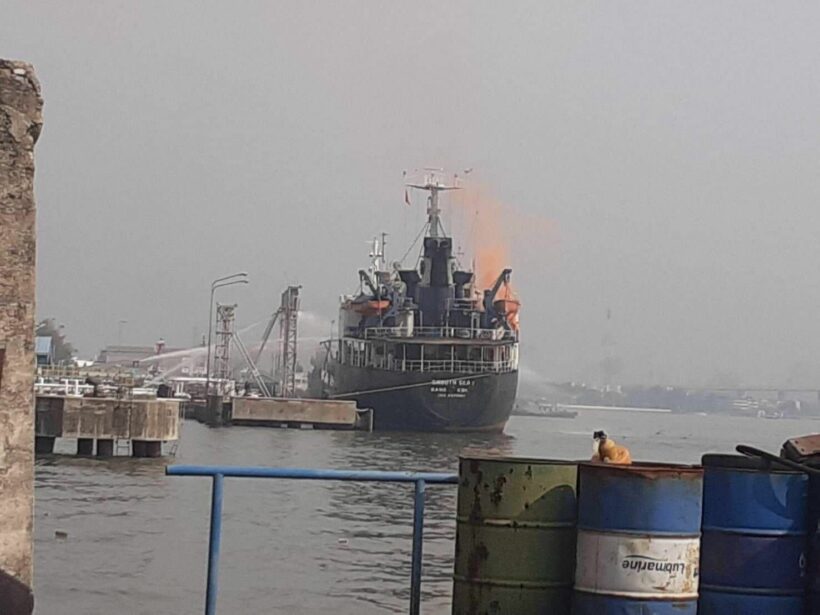 One person was killed and three were injured when an oil tanker caught fire following an explosion on the vessel. The tanker was docked at a pier on the Chao Phraya River in Samut Prakan, just southeast of Bangkok, when there was a sudden explosion. Three people were able to escape while another person was reported missing. Human remains were later found on the charred oil tanker.

At around 9am yesterday, Samut Prakarn’s Marine Department Office received a report from the IRPC Company that the oil tanker Smooth Sea 2 docked at a company’s pier was on fire. The firefighter team spent around 30 minutes controlling the incident and reported no oil was spilt into the river. The Marine Department is currently investigating the cause of the incident.

Those nearby heard a loud bang and could see the tanker erupt into flames. One person was seriously injured and was sent to Bang Pakok 3 Hospital for treatment while the other two men were treated for minor injuries. Another man was missing.

The vessel was searched after the fire was extinguished and only some parts of the body were found, including the head, right leg, right arm, and left ankle. The body parts have not yet been identified.