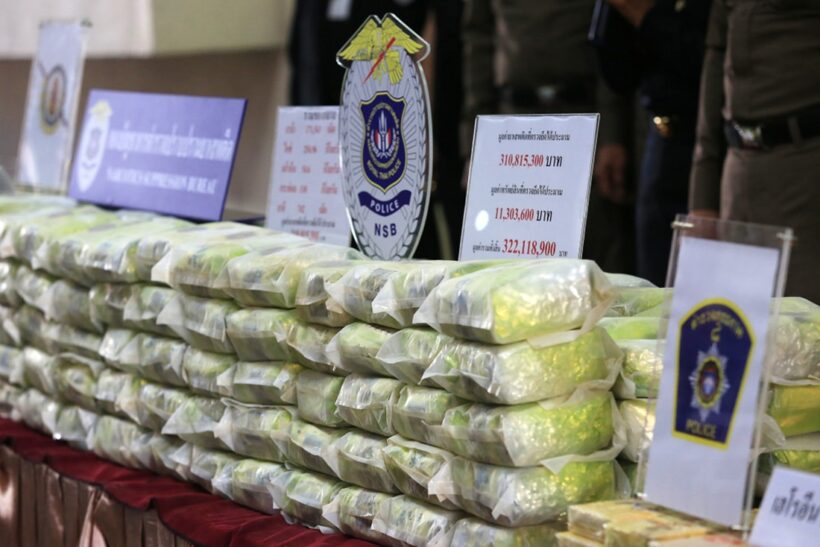 Police seized a large haul of narcotics with a street value of 320 million baht from 101 suspects in 88 drug busts during March 28-April 17.

Besides confiscating 255 kilograms of crystal methamphetamine, over 170,000 methamphetamine pills, 54kg of heroin, 110kg of krathom leaves and 745 esctasy pills, police also seized 11.3 million baht of assets belonging to the suspects.

The chief of the Narcotics Suppression Bureau cited a number of interesting cases, such as the April 11 bust in which three male suspects from Chiang Rai were nabbed along with 250kg of crystal methamphetamine, a 10-wheel truck and a pickup at a service station in Phayao’s Chiang Kham district. He said police had acted in this case after a tip-off about a Wa tribal drug ring’s smuggling of narcotics from Laos into Thailand. The three suspects confessed to police that they had been hired by an investor in the neighboring country to transport the drugs for delivery to a dealer in Ayutthaya, who would distribute them to other retailers in central Thailand, Sommai added.

A police investigation also found that one of the three suspects was wanted in connection with a separate drug bust, in which 9.4 million methamphetamine pills and 788kg of crystal methamphetamine were seized in Chiang Rai’s Wiang Kaen district early this month.

The three men were initially charged for having drugs in their possession with the intent to sell.

Day Six – Eight accidents but no deaths on Phuket’s roads