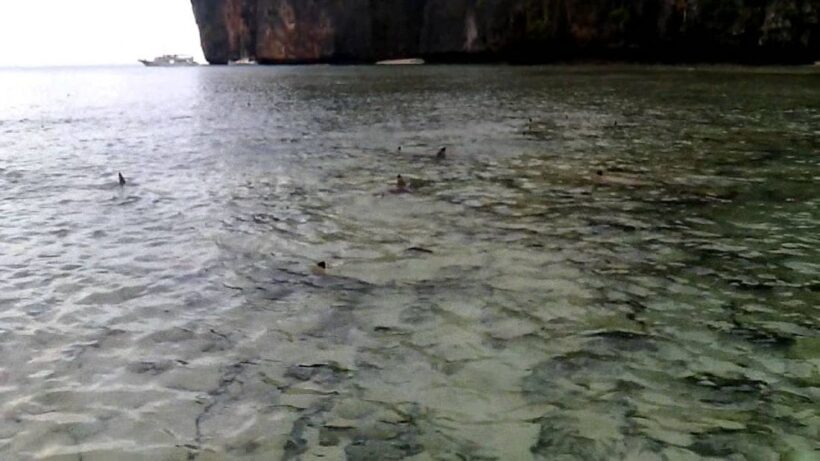 A school of black-tip reef sharks has been sighted swimming in knee-deep water around the beaches of Phi-Phi islands, causing more excitement among conservationists,

Thai PBS says that even Dr Thorn Thamrongnavasawat, a well-known marine scientist attached to the fishery faculty of Kasetsart University, admitted he was astonished by the sightings of the sharks.

“Believe it or not this is Thai sea and the Phi-Phi island. Four years ago, there was no hope. Look, today at Phi-Phi, there are sharks swimming in knee-deep water along the coral reefs around the national park, not just at Maya Bay,” wrote Dr Thorn in his post on the social media together with a clip showing the sharks swimming.

The clip has attracted a stream of praises from netizens for the tireless effort of park officials to restore the environment of Phi-Phi islands and the nearby Maya Bay where black-tip reef sharks were also sighted.

(The article then goes on to say that ALL Phi Phi island beaches are currently closed, which is incorrect. Maya Bay and its beach has ongoing restricted access, but all other Phi Phi beaches and bays remain open for tourists.)

MAYA BAYBlacktip reef sharks were spotted at the recovering Maya Bay on Koh Phi Phi Ley today. This morning official at the Hat Noppharat Thara-Mu Ko Phi Phi National Park reported that many Blacktip reef sharks were discovered swimming just off the beach in Maya Bay. They said it was a good sign of the improving biological system.VIDEO: DNP/Newshawk Phuket