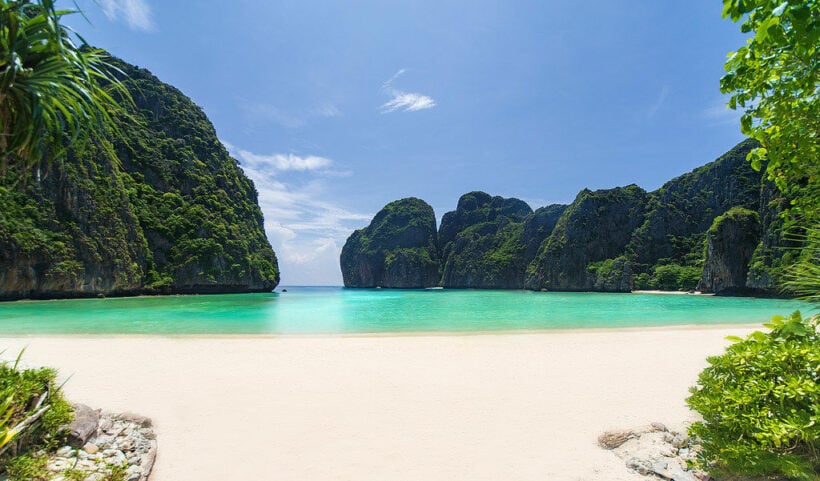 Just four months after its epic reopening in January, officials are announcing that Thailand’s Maya Bay, located on Koh Phi Phi Leh in Krabi, is planning to temporarily close again from August to September this year. The bay had reopened in January after closing in 2018, before the Covid-19 pandemic hit, because of how much tourism had damaged the ecosystem.

Since the reopening, almost 100,000 people have visited the bay this year, raking in over 20 million baht of income, according to the Minister of Natural Resources and Environment. It’s also been a busy time for tour operators who have been busy with visitors, eager to get back to the famed Maya Bay.

But yesterday, the ministry announced the bay will temporarily close again in order to further protect its fragile wildlife. The minister said that even though the ministry had taken strict measures to limit the number of visitors to Maya Bay, over 3,000 visitors came every day during Songkran. The ministry allows 380 tourists per hour to visit the island, and requires them to book trips there in advance. The ministry has banned swimming in the bay.

But even though walking on the actual beach are being banned, people can still visit Maya Bay and take photos from just outside the zoned area.

“While Maya Bay will be closed to visitors walking on the actual beach, just like during the original closure you will still be able to view the bay from a boat. So it’s just going back to the same rules as prior to it’s reopening.”

Maya Bay’s 3 year closure was successful at bringing back plant and animal species that had disappeared due to tourist overrun. The most notable animal to return to breed in the bay is the blacktip shark. In March, a park ranger told NPR that before the park closed, when there could be over 6,000 tourists a day, no one would ever think of seeing the local sharks. He said now, on a good day, 160 sharks can be seen.

Maya Bay was popularised by the 2000 movie “The Beach” starring Leonardo DiCaprio.

See The Thaiger’s video from last year about controlling tourists in Maya Bay (filmed before the Bay reopened to full tourism)….

Pinetree
2 minutes ago, Soidog said: It’s like having a magnificent painting and keeping it locked up in a vault. I'd sell it and buy a Cirrus Vision Jet 🤣

Soidog
It seems like their calculator has let them down again. Quote from the article: The minister said that even though the ministry had taken strict measures to limit the number of visitors to Maya Bay, over 3,000 visitors came every…

Soidog
8 minutes ago, Pinetree said: I'd sell it and buy a Cirrus Vision Jet 🤣 Well so would I 😂😂. But it would be like having a Cirrus Vision Jet and keeping it in a hanger 😉
Ramanathan.P
Better close it permanently. That is good for nature from invading humans. At least mother nature can protect her beloved ones in her own way. No human will die if not allowed to visit. But if allowed to visit all…

Cabra
Note to all unsuspecting tourist: Thailand is not really open.