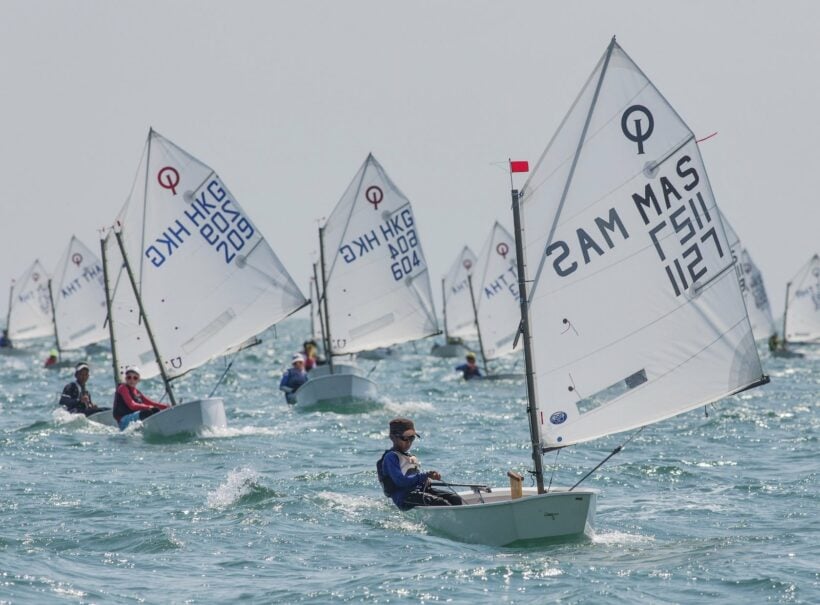 Thailand’s premier youth sailing event is just around the corner. The Thailand Optimist National Championships, held as part of the Top of the Gulf Regatta, will see more than 100 youngsters from around Thailand and Asia compete over three days (April 29 to May 1, 2018) in Pattaya.

First sailed in 1976 and annually since, the ‘Optimist Nationals’ as they have become known, is sailed in the single-handed Optimist boat and eligible for youths upto the age of 15 years old. Originally launched as the Optimist Thailand Championship Cup, the event has grown to become the pinnacle of youth sailing competition in Thailand and is organised by the Junior Sailing Squadron of Thailand under the auspices of Yacht Racing Association of Thailand.

Last year’s Thailand Optimist National Champion, 12-year old Panwa Boonnak, is back to defend his title in Pattaya. Following his win at the 2017 Nationals, Panwa went into the Optimist World Championship 2017 Thailand, held July 11-21, 2017 at Pattaya’s Royal Varuna Yacht Club, with high expectations. Aiming to be the second Thai to win the Worlds after Noppakao Poonpat won in 2010, Panwa struggled in the heavy breeze of the opening days and after six days of tough competition amongst 280 sailors from 62 countries, Panwa finished a credible 10th place overall.

Having competed at a number of overseas events since, the most recent being in Singapore and Myanmar, Panwa will have to be at the top of his game to beat a strong line up of fellow Thai National Team Sailors, and impressive talent from overseas.

Leading the international charge will be Hong Kong’s Duncan Gregor. Having competed in Thailand a number of times, his best position at the Optimist Nationals to date is second overall in 2016. After winning Hong Kong Race Week earlier this year, his second successive win, he’ll be looking to go one place better at the Optimist National and is one to definitely watch.

Gregor is joined by many others from the Hong Kong Team as well as top sailors from Singapore, Malaysia, Indonesia, India and many more countries, and the standard of competition is expected to be high.

The Optimist Nationals, however, is about more than just competition. For many young sailors, this is their first major race and organisers split the fleet into A and B, with the B fleet racers made up of the newer, less experienced sailors, ensuring they have fun while learning more about what sailing in an international competition is all about.

For more about the Thailand Optimist National Championships, visit www.topofthegulfregatta.com where the results will be posted daily during the regatta.

Duncan Worthington works with Infinity Communications (www.infinity-comms.com) and consults to leading sports brands and rights holders in Thailand. He can be contacted at sport@infinity-comms.com.