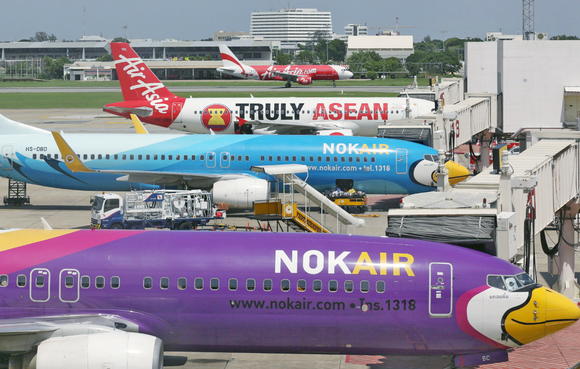 Thailand’s aviation sector is set to grow at a higher rate after the International Civil Aviation Organisation (ICAO) removed its red flag over safety issues, signifying the agency’s satisfaction with measures taken over the past three years to address concerns.

Chula Sukmanop, director-general of the Civil Aviation Authority of Thailand (CAAT) Office, said ICAO officials had inspected the Thai aviation regulatory system from September 20-27 and approved a total of 33 measures that tackled previously expressed safety and other concerns.

Later, the ICAO team concluded that they were satisfied with the solutions to these concerns and would formally inform the CAAT of its decision next week. On the ICAO website, which features safety audit results of more than 180 countries around the world, only five countries are currently red-flagged – Malawi, Kyrgyzstan, Haiti, Eritrea, and Djibouti.

In the case of Thailand, ICAO had red-flagged the country’s aviation sector in 2015 citing significant safety concerns on the regulatory system and other aspects of the aviation sector, prompting the government to implement multiple measures to tackle the issues over the past years.

The removal of the red flag will allow Thai-registered airlines to expand their overseas services conveniently due to the lack of significant safety concerns regarding the process of issuing relevant licences and other safety-related issues.

In addition, there would be no restrictions on frequency of flights or on new routes and services.

The private sector can also apply for new aviation and related licences from the Thai regulatory agency, which was previously restricted due to the country’s “red-flag” status.

Chula said the removal of the red flag would facilitate a higher growth of the Thai aviation sector, which has been expanding at an annual rate of 8 per cent over recent years due to high growth in the tourism sector.

Over the past several years, Thailand has seen a rising number of international tourists, expected to top 30 million this year, including a large number from China.

The tourism boom led to an under-regulated aviation sector, prompting the ICAO to express its concerns in 2015 and red-flagging the country.

Despite the removal of the red flag, Chula said CAAT would continue to upgrade the country’s aviation regulatory standards to meet international criteria used by the ICAO, which conducts a thorough review of member countries’ standards annually.

Previously, a total of 10 Thai-registered airlines were also required to apply for new Air Operator’s Certificates (AOCs) with CAAT, a process expected to be completed around January next year so that they will be in compliance with the ICAO’s regulations.

Besides the ICAO’s red flag, the Prayut Chan-o-cha government also faced challenges in the fisheries sector after the European Union in 2015 issued a yellow card over Illegal, Unregulated and Unreported (IUU) problems.

Earlier this year, the EU formally recognised the country’s efforts in tackling the IUU problems.

The country was threatened with a ban on export of seafood to the EU market unless the IUU problems were resolved properly.

Taking the bang out of this year’s Vegetarian Festival