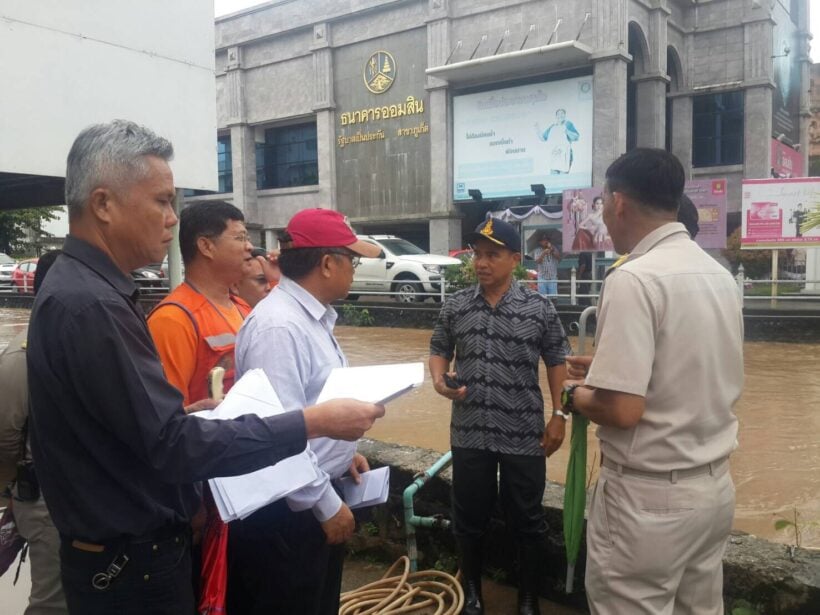 Patong’s Mayor has announced, what she hopes are, solutions to the recurrent floods and set a budget to solve the problems in the long term.

As Patong is one of the areas that always suffers from the flood on the island, the Mayor, Chalermluck Kebsup, said that she has surveyed several spots in Patong and can now specify the actual problems around the tourist town.

“I found that the drain-ways like canals, ditches and sewers are clogged by many items including some furniture, big pieces of cement and even refrigerators. We have already unclogged and dredged the drains which will improve their efficiency,” said the Mayor.

She explained that the Municipality found out specific areas in Patong that are hit by floods following a survey. They are; in front of Prig Thai Hom restaurant and the Arunpat Village on Nanai Rd., Sai Nam Yen Intersection, Dolphin Intersection and in front of Patong Hospital.

“In front of Prig Thai Hom Restaurant, the water is coming from the mountain on the east side of the town which washes down soil and stones to the drain, clogging it up and resulting in localised flooding. For this area, we solved the problem by building a big barrier to block the soil and stones from the mountain. Regarding the front of Arunpat Village, the municipal staff already installed a pumping system and a new water well. There is a small issue for this spot as the pipe to the well is too small meaning the water cannot flow fast enough, creating flood on the road when the rain is particularly heavy.”

“As a long-term flood solution, I’ve planned a budget for this year. The Rat-U-Thit 200 Pee Rd from Sai Nam Yen Intersection all the way to Bangkok Bank, a total length of 200 meters, will have the drainage extended. The road has a bottleneck shape and it is difficult for rain water to drain. The drains along the road will be expanded to the same size and the project is expected to start within the next 2 months,” she said.

Meanwhile, Phuket’s Governor has also planned for additional budget to extend the canals in Phuket town.

“The Phuket Municipality and Phuket Provincial Offices of Public Works and Town & Country Planning has found that some parts of the canals, draining water from the road to the sea, need to be extended. The budget will be spent to widen the canal to at least 8 meters to support the overflow from the canal. However, we must deal with the land owners as some parts of the canal are located next to privately-owned land. The public also can help solve this issue by not throwing rubbish into the canals,” said Governor Plodthong.

Robber caught with a long list of items worth 400,000 Baht