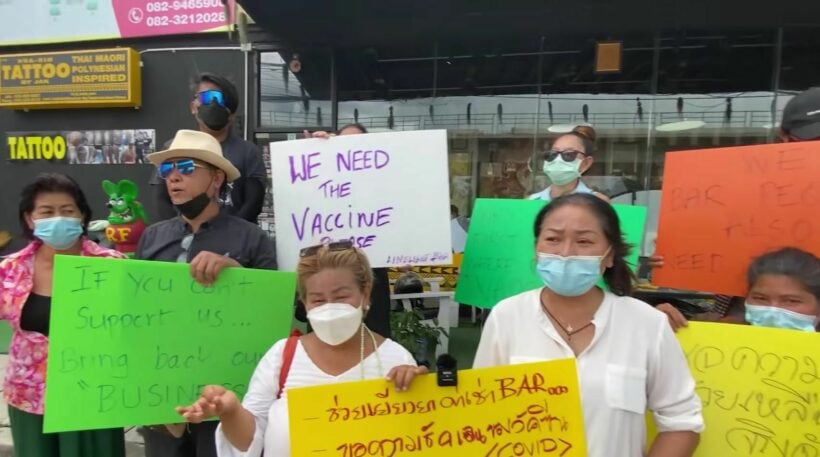 PHOTO: Hua Hin Bar staff protest for help. (via Jonny There Is Something Happening YouTube)

The girls in Hua Hin bars are revolting! They’re revolting in the streets against the government’s handling of Covid-19. Like their counterparts in Bangkok and Pattaya, bar owners and employees along with local musicians staged a demonstration to protest against the continued closures of nightlife and entertainment venues in Hua Hin.

The fed-up nightlife workers carried signs calling on the government to accelerate vaccinations for locals and entertainment workers as well as offer some sort of financial relief as many other industries have received. Bars, pubs and clubs have been repeatedly shuttered to prevent Covid-19 outbreaks in Hua Hin and have been currently closed for months.

With borders still mostly closed and nightlife kneecapped by Covid-19 restrictions, Hua Hin bar industry workers took to the streets, marching from Soi 80 to Soi 94 today calling for support as their income has been essentially eliminated.

Local vlogger Jonny There is Something Happening interviewed several protestors for his YouTube channel. The owner of Toro bar said the government had abandoned the bar industries in Hua Hin, but owners still need to pay salaries and rent. He said people are losing their homes and cars and are suffering without any aid.

The owner of Euro Bar was also interviewed and advocated for more communication from the government to tell the nightlife industry what’s going on and what help they can provide. He said that the bar industry in Hua Hin need vaccines and called for the government to provide vaccination.

Workers in the nightlife sector have been growing increasingly frustrated with the long closures and lack of support from the government. A blog last week advocated a campaign called Koo Ja Perd Mueng Ja Tam Mai Wa, in English essentially “F— the rules, I’ll open.” Famous bands joined a coalition of industry associations to present a 7-point plan to members of parliament to aid bar and entertainment venue workers.

Bars have been closed for several months and, while some areas are beginning to allow alcohol in restaurants again, there is currently no timeframe in place for the reopening of clubs, bars, and other nightlife and entertainment venues in Hua Hin or throughout Thailand.

GuyIncognito
they are just drug dealers
TSS
they and all the other protesters before them, so polite and respectful. Will get them nowhere, same as the others. Money talks. Hands out for help? "what will be, will be"