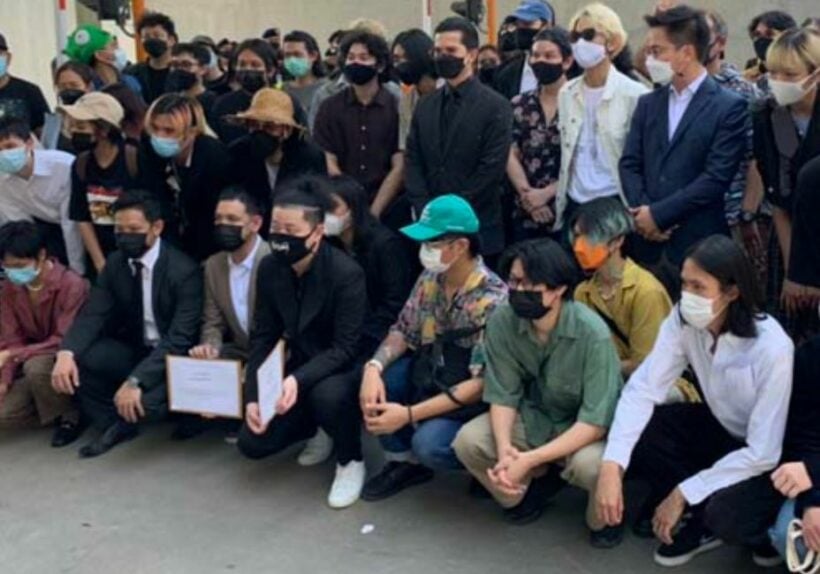 PHOTO: Entertainment and nightlife reps petition to reopen August 1. (via The Pattaya News)

At 10 o’clock this morning a rally of owners, staff, musicians and entertainment sector workers gathered at the House of Representatives to submit a petition for support after long-term Covid-19 closures or permission to reopen August 1. Dozens of representatives from the entertainment industry took part in the demonstration after 3 continuous months of shuttered businesses due to the pandemic with almost no financial assistance from the government.

The demonstration and petition was organized by The Federation of Night Business Professionals and Entertainment Businesses of Thailand and was given support by the Music Club of Thailand, an association of tens of thousands of performing musicians. Prominent Thai bands like Cocktail, Tattoo Color, and Slot Machine showed up to give some star power to the protest.

The group complained that for more than a year closures of nightlife and entertainment venues has been a regular Covid-19 prevention action, with a total of 8 months of shutdowns including the last 3 months continuously. And unlike construction workers in lockdown that received a partial salary, or food businesses whose customers receiving government assistance to keep purchasing food, the entertainment sector has received very little relief.

Group leaders stressed that the protest and petition was not about asking for a handout and that the entertainers and workers that they represented would much rather go back to work August 1 or sooner and earn a living than sit idly and collect government handouts. They pointed out that nightlife closures and alcohol bans were usually the kneejerk reactions for stopping Covid-19 outbreaks, but plans for all the displaced workers are rarely considered or enacted.

They did concede that it was an informal industry and not every bar worker and musician had proper social security, but they argued that many construction workers were in a similar situation and didn’t pay any taxes but relief measures were often announced concurrently with closure orders. The group asserted even with informal employment, they are still Thai citizens who pay tax and spend money in the economy and as such, they should be allowed to get back to work or be offered some assistance.

The entertainment industry group submitted a seven-point petition to members of parliament who vowed to get it into the appropriate hands. Government officials said they understand the plight of entertainment venues and nightlife workers whose businesses were closed the longest and whose access to relief were the most limited. Parliament members resisted making any promises about reopening or specific progress though.

The seven points in the plan were as follows:

Pompies
It is deeply saddening to see how these people have been neglected by the authorities. And even more saddening that there will be no help forthcoming because the country is in the hands of fundamentalists who wish to see the…
kmc
sucks if you're a small business owner.  but ok for people to rush big c and congregate.
truth
In my opinion bars are some of the best places for disease transmission and incubation on all levels.  keeping them closed will help stop the spread of Covid

King Cotton
18 minutes ago, truth said: In my opinion bars are some of the best places for disease transmission and incubation on all levels.  keeping them closed will help stop the spread of Covid I have to agree, there! It only…
Stardust
1 hour ago, King Cotton said: I have to agree, there! It only takes one infected person to enter a bar-full of people for possibly a bar-full of infected people to leave. I think we all remember that infamous Thai-boxing…