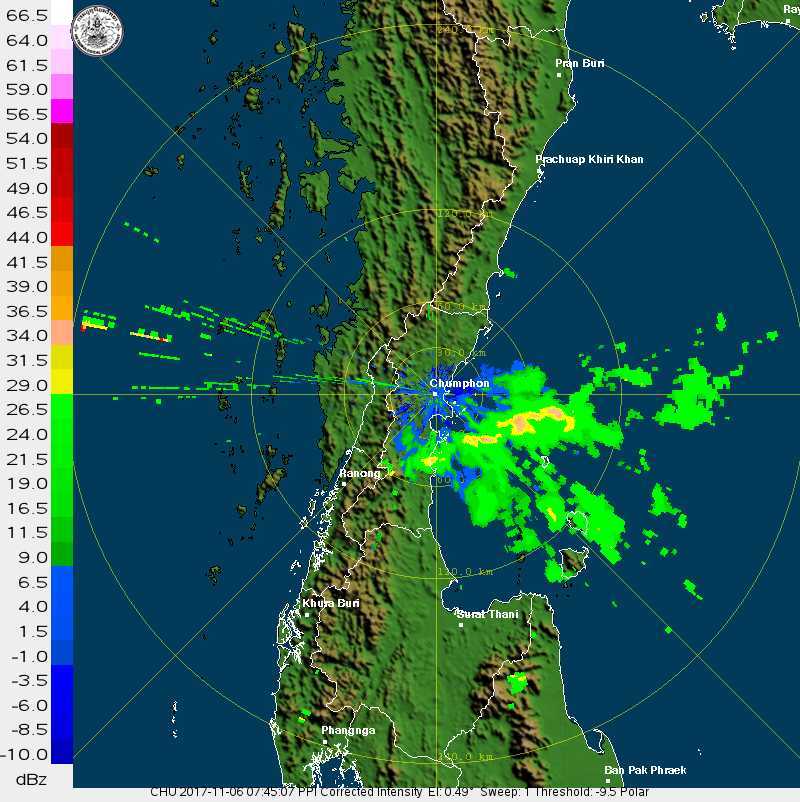 (There is an update from the TMD at the bottom of this article – the tropical depression is weakening as it moves across the landmass from Gulf of Thailand towards the Andman Sea, north of Phuket)

A severe weather warning was issued for the South Eastern Region on Monday, as the Meteorological Department forecast heavy rain for the entire region, while banana farmers in Songkhla were already suffering gale-force winds caused by Typhoon Damrey.

The Meteorological Department forecast that there would be heavy rain in more than 70 per cent of the South Eastern Region on Tuesday and three-metre waves in the Gulf of Thailand. Sukit Wiriyaphongsukit, a banana farmer in Songkhla’s Na Mom District, said half the banana trees in his farm had been destroyed by the strong winds. His banana crop would be ready for harvesting within a week, he said, but up to 2,000 trees had been uprooted by the storm and he had already asked the authorities for help.

Meanwhile, three districts in Surat Thani have been designated as being at risk for flash floods but provincial Governor Witchawut Jinto said the weather conditions in the province were still normal on Monday. However, the local authorities were already on high alert, he said, and officers would be on hand to help people evacuate in the event of disaster, especially in the at-risk districts of at Kanchanadit, Chaiya and Phrasaeng. Meanwhile, 500 officers from the Natural Resources and Environment Ministry have been dispatched to the province to prepare and cope with possible flash floods. It was also reported on Monday that the ferry services to Koh Samui and Koh Phangan were still operating as usual despite the rough seas.

UPDATE FROM THE TMD…

At 4.00 p.m. today (6 Nov 17), the tropical depression is due 250km east of Nakhon Si Thammarat or latitude 8.0 degree North, longitude 102.0 degree East. With sustained winds of 55 km/hr, the storm is moving west-northwest slowly to make landfall over Surat Thani by tomorrow (7 November) before moving out to the Andaman Sea. Widespread rain will be likely with gusty winds and torrential downpours much of the areas. Residents in the areas should beware of severe condition and possible flash flood.

Affected areas are as following: