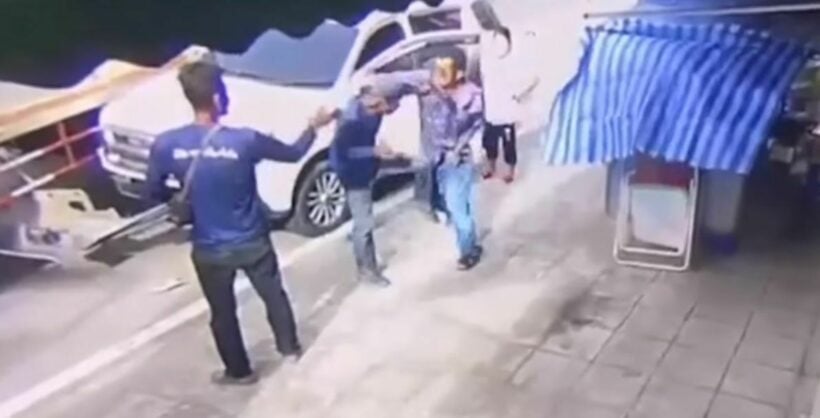 A driver in Sri Racha district of Chon Buri allegedly threatened another driver with a gun, and physically attacked him, over a minor car accident earlier this week. The alleged victim, 40 year old truckdriver Mongkol Kladngam, told Thai media he got into a minor accident while he was delivering goods.

Mongkol said he planned to negotiate with the driver in the other car, but the driver was enraged, pulled out a gun, and smacked him in the face several times. CCTV footage shows the driver step out of his car to look at the damage, before he gets back inside his car and comes out again with a gun.

A group of 3 workers cautiously walks toward the driver, and one of them, Mongkol, tries to speak to him. The driver holds the gun in one hand, and smacks Mongkol with the other. Pushing and shoving continues between the 2 parties as the workers try to apologise.

The incident happened outside of a souvenir shop. According to the report, the victim reported a case to the Sri Racha Police Station, and pleaded with the attacker to come to the station to negotiate.

In March, a man in Sri Racha was shot at while driving, in another incident that police thought might have been due to road rage. The victim, who was luckily not hit by the bullet, said he was driving well and had no problems with anyone.

RichardR
W. T . F. AND O. M. B,   Let's ignore that the guy had to adjust and pull up his pants, he is coming from being parked at the side of the street, even if the worktruck would have driven…
Maikel
im worried. Thailand is becoming more dangerous everyday. more guns, more shooting and more and more methanphetamines. I was thinking about move to bangkok and open business there, but i'm really worried and thinking about take other way D-Boy
And they are not wearing masks...

Cabra
Everyone is so angry all the time, it seems, everywhere. If I wasn't mistaken, I'd say we are witnessing an acceleration in the decline of society as a whole. All I can do is control myself and choose to be…