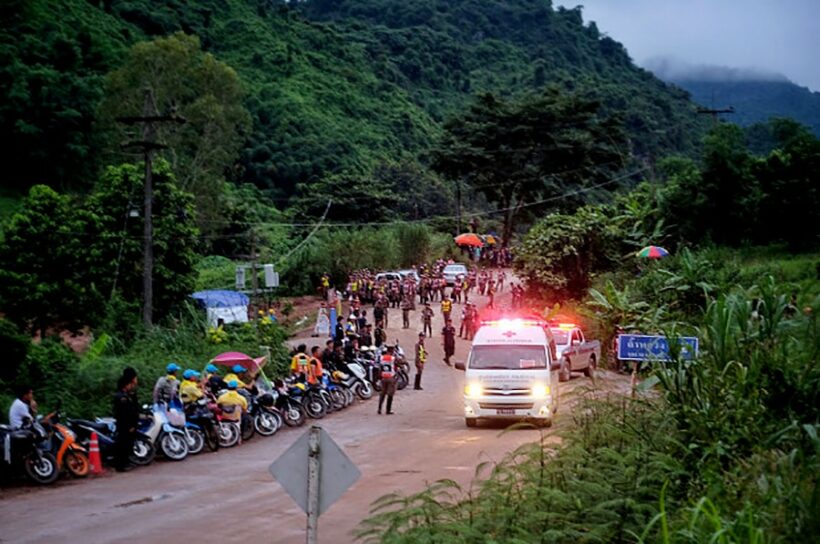 The Mu Pa football team will have the full group back together again soon.

FOUR to go!!! Plus there will be three Thai Navy Seals and one doctor to evacuate as well – they were inside with the team since they were found helping them with preparations for their arduous journey out of the caves. The weather has been cloudy but the rain has, thus far, held off but expected to start again tomorrow.

11 of the team are now out of the cave with Number 12 and their coach already at ‘Hall 3’, half way back towards the entrance.

Assistant coach for the Mu Pa football academy Eakkapol Chanwong reported to now be at the front of the cave along with the 12th young player. So, that’s…………13!!!!!

The Thai Navy Seals have also just posted “today Mu Pa will be all together.”

Reports say the final five of the team will be transported to hospital together.

We are now waiting for the evacuation of the three Thai Navy Seals and the medic who have spent the last week with the team preparing them for this remarkable evacuation.

At 5.55pm an ambulance has emerged from the cave entrance area, heading to the helicopter evacuaiton zone.

5.55pm The 9th team member is at the helicopter area preparing to take off, reported by Army times Thailand.

Thirteen is a lucky number

Chiang Rai: Solid food but no TV – Doctors report on the first eight out of the cave