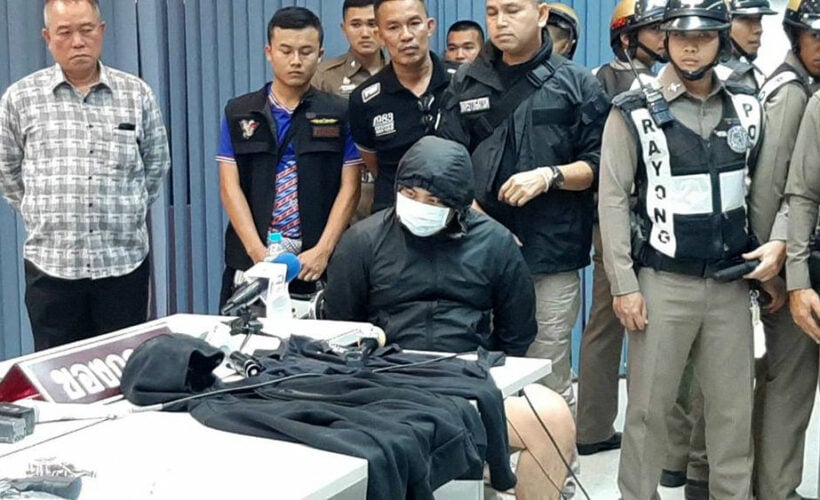 The main suspect in the murder of a teaching couple in Rayong, east of Bangkok, has been arrested in Chiang Mai. He was arrested along with another man accused of helping him escape. Police have arrested Supakrit Sujasee, a Chiang Mai native, and Panuphong Bualoy early yesterday. Thai media report that they were caught as they were preparing to flee to Myanmar.

Twenty-two year old Supakrit is accused of killing Arocha Supanith, a physics teacher, and his wife Preeyaporn Piang-ngam, a maths teacher. Both were teachers at Assumption College Rayong.

The couple were found dead on Thursday with multiple stab wounds at their home in Rayong. Their Ducati motorbike, which had recently been offered for sale, was missing. But the motorbike was found the next day at a shop in Chon Buri, and police received a tip-off that the suspect was near Don Mueang International Airport in the capital.

Despite the leads, police eventually tracked the suspect down, and apprehended him and his accomplice in Chiang Mai. They were returned to Rayong for formal charges to be laid.

Local media report autopsy results showed bullets in the victims’ heads. It’s believed the suspect shot the couple before stabbing them and staged the scene to make it look like they’d had a violent quarrel. A handwritten note posted on the door of the house also made it look like a domestic argument.

Neighbours told police that they heard three loud bangs “like gunshots” on the night of the killings.

The suspect reportedly went to the couple’s home on the pretext of purchasing the motorcycle. Police examined CCTV footage showing the suspect entering their house and later riding away on the bike, according to Bangkok Post reports.

The grieving parents of the slain physics teacher are calling for the death penalty.

Samarn Supanith said he was delighted that police made a speedy arrest and tapped his son’s coffin of his son to tell him the news.

“The killer deserved to be put to death.”

His wife told Thai media that her son was cheerful and had no conflicts with anyone. She said that if she was able to meet the suspects she would ask…,

“Why did you kill my son? Why did you take the life of a defenceless person?”

“I don’t understand why a good person had to be killed by this sort of man.”

Man confesses to stabbing murder of ex-girlfriend in Songkhla