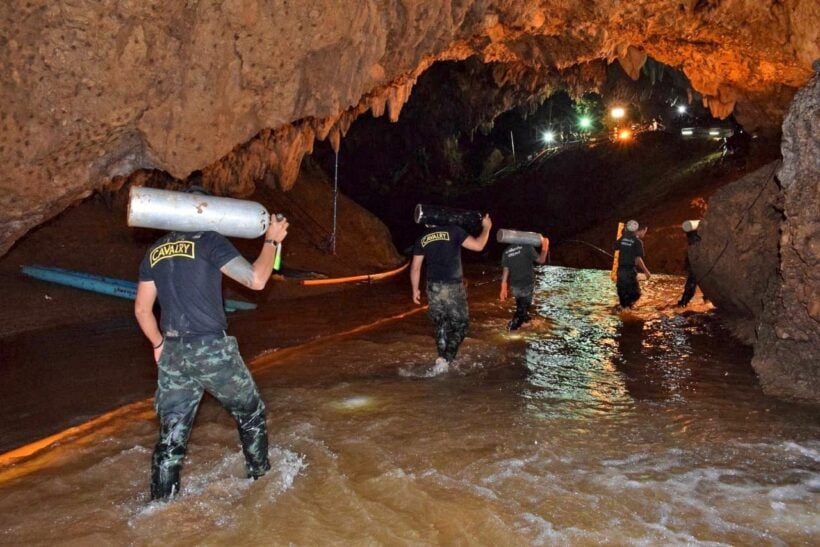 As the frantic effort continues around the Tham Luang caves to find alternative ways to get to the cave chamber where the 13 footballers have been waiting since two weeks ago, ‘chimneys’ or tunnels from the top or side of the mountain, down into the cave, are being established.

AFP are reporting that there have been more than 100 of these chimneys drilled in the hope of finding an open space that could be accessible to the team.

With their entrance route now an unviable exit route, because of flooding waters that are still too high to attempt an evacuation, alternatives are being sought. Spokesperson Narongsak Osottanakorn, former governor of Chiang Rai, says some of the chimneys are as deep as 400 metres. But, so far, they haven’t reached anywhere that is accessible to the team.

“We estimate that (they) are 600 metres down, but we don’t know the (exact) target,” he said in the APF report.

Speaking about the oxygen situation, Narongsak says that they have now established sufficient air lines through to the chamber where the team are trapped and removed some of the support team who were staying with the boys. For now, the oxygen levels are no longer an immediate problem.

The group of 13, the 12 young footballers aged between 11-16, along with their 25 year old coach, headed into the caves as a post-training exercise on the afternoon of Saturday, June 23, two weeks ago.

You can read the AFP/The Nation report HERE.