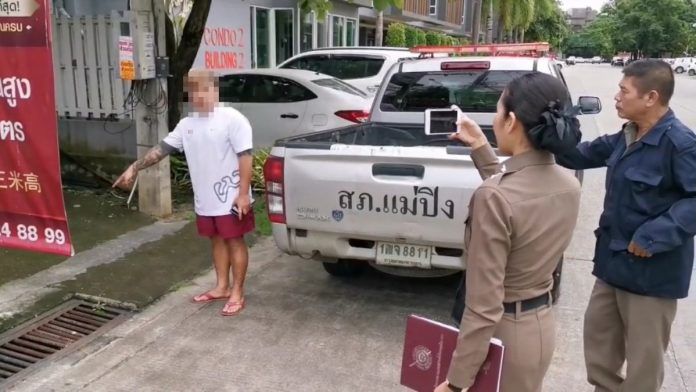 Police have released a Singaporean man accused of using a scythe to attack his Thai wife in a Chiang Mai street.

Following the attack, it’s understood that the man called an ambulance to take his wife to hospital, and then surrendered to police.

The Singaporean says the couple, who have two young children together, frequently argued about his wife seeing another man. When she still hadn’t returned from the daily school run after a few hours, he used a GPS app to trace the whereabouts of her car.

He managed to track her to Hip Condominium in the Chiang Mai business park area, where she was allegedly meeting another man.

It appears that jealousy got the better of him, as he took a scythe normally used for cutting grass from his truck and slashed his wife across the back and legs.

The attack took place in the middle of the road, in broad daylight, and was witnessed by several passersby.

The police have since released the man on the basis that he surrendered following the crime and was remorseful for actions. They say they plan to bring husband and wife together to discuss what they’re calling a domestic dispute.

It’s unclear when this meeting will take place as she is still in hospital, recovering from her injuries.