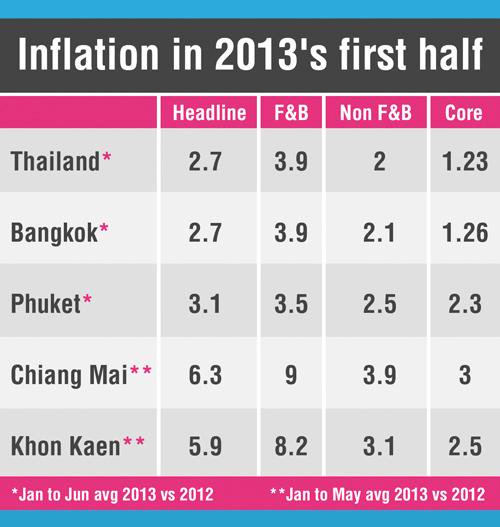 PHUKET: The island continues to outpace most of the rest of the country in terms of inflation, with the cost of living in Phuket during the first six months of the year, growing at a rate 10% faster than Thailand overall.

Meanwhile, headline (overall) inflation in the Kingdom’s two main cities in the North and Northeast was more than 40% higher than the national average.

As measured by the average Consumer Price Index (CPI), Thailand’s cost of living in the first six months of 2013 rose by 2.7% over the same period last year, while overall inflation in Phuket was measured at 3.1% during the same period, compared to 6.3% in Chiang Mai and 5.9% in Khon Kaen.

The Phuket Commerce Office, in collaboration with the Phuket provincial government and the Commerce Ministry’s Information Office and Bureau of Trade and Economic Indices, recently published the province’s Consumer Price Index (CPI-P) analysis for the first half of the year.

It should also be noted that this year, the Kingdom’s central indices office changed its base year – the year used to compare current consumer prices to – from 2007 to 2011.

In other words, during the period, the cost of living in Phuket rose about 60% quicker than Thailand as a whole.

Compared with the national CPI report, which now surveys 450 items (previously, 407), the CPI-P survey for Phuket covers only 238 consumer goods and services.

Consumer expenses and prices for items or services categorized as entertainment, reading, education and/or religion, inflated in Phuket by only 0.7%.

A change from the usual, Phuket has not had the highest inflation rate in the country so far this year, with the economies of major cities in the North and Northeast this year being affected by a number of economic stimulus initiatives and schemes.

Among the most controversial of these is the government-sponsored rice pledging scheme.