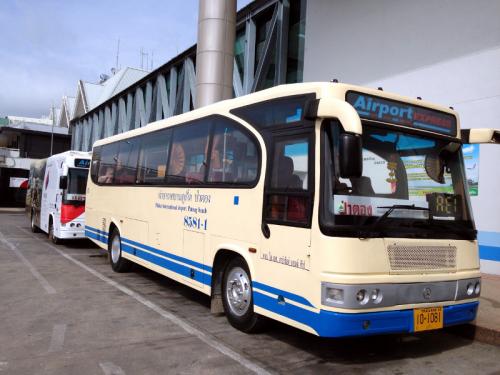 PHUKET: The long-awaited Phuket airport-to-beach bus hit the road at 9:30am today with little fanfare.

Passengers on the inaugural ride from Phuket International Airport to Patong included media, tourists and relatives of bus operator Prakob Panyawai. No Phuket officials were along for the ride.

Married couple Ben and Kim, first-time visitors from England, had just arrived from Kuala Lumpur and were headed to Kata.

“We just found out about the bus. We were getting in a bus to Phuket Town, then heard we could go directly to Patong,” said Ben.

The couple was surprised to learn that a taxi ride to Patong could have cost them 1,000 baht.

“Our destination is Kata beach. It’s great that the bus is taking us closer to Kata instead of to Phuket Town,” Ben added.

“We have been waiting for four months to see it happen,” she added.

“We wanted to go all the way to Kata-Karon but local people wouldn’t allow us,” she lamented.

Mr Prakob said, “We planned to have a big celebration at the airport for the first bus, but changed our minds after talking to officials.”

“The bus is still a sensitive topic, so we are giving it a simple launch, without officials,” he explained.

Phuket Sports: Zack attack as clock is turned back