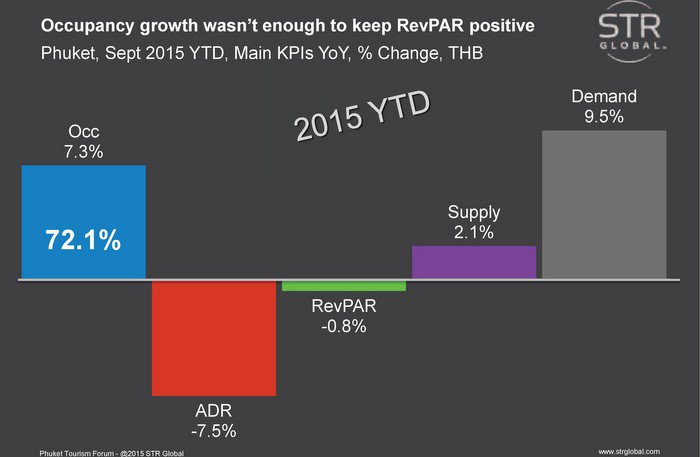 PHUKET: Differences in source markets and government spending have forced Bali and Phuket to take dramatically different approaches to adjusting to the recent tourism climate with regards to balancing occupancy and rates.

Hotels and resorts in Bali have taken a mostly unified approach by holding rates and allowing occupancy to dip.

In Phuket, however, even within market segments, a number of approaches can be seen, as some hotels and resorts drop prices to increase occupancy and others choose to hold rates relatively steady.

“Source markets for Bali are more widespread and are also different as they have traditionally been skewed to more domestic visitors than Phuket. They also have a lot more Australian visitors,” STR Global’s Area Director for Asia Pacific Jesper Palmqvist explained to the Phuket Gazette last week.

“I can think of two reasons for the rates holding in Bali as compared to Phuket. Firstly, Phuket is different because it has seen a dramatic shift from Russians to Chinese wholesale visitors – with the latter commanding a much lower rate overall. So it’s a simple demand/supply equation, and Bali has not seen the same shift.”

“Secondly, Bali is currently going through different dynamics, with less government spending on hotels in light of austerity measures, along with many new hotels opening. They need to be good at revenue management and should try to uphold rates for [the day] when demand starts to come back.”

“In terms of RevPAR, it is not always easy to make changes as a single hotel. When the overall tourism profile changes, you either decide to accept the majority of guests or you don’t,” Mr Palmqvist said.

“But we do see, of course, which hotels seem to attract what kinds of guests as well. By being diligent and skilled you can cover your bases better by widening your source markets and guests – more easily done these days using good data intelligence and online tools.”

“The challenge for Phuket could be the fact that it is primarily Chinese and Russians coming in, and then there is a wide gap down to the next source markets; there could be volatility in that.”
The diverse strategies being implemented should help mitigate some of that volatility to make Phuket, as a destination, stronger.

Nonetheless, given the drop in rates and the clear dominance the Chinese market is expected to have over the next several years, it will be very difficult to grow RevPAR in Phuket.

“Customers quickly get used to paying lower rates, which diminishes the value proposition of the property and also hurts the essence of the brand. I would not say this is happening to an extreme in Phuket – it’s larger forces at play here. The majority of hotels seemed to have managed it well so far.”

Finance: Growth or value stocks, that is the question