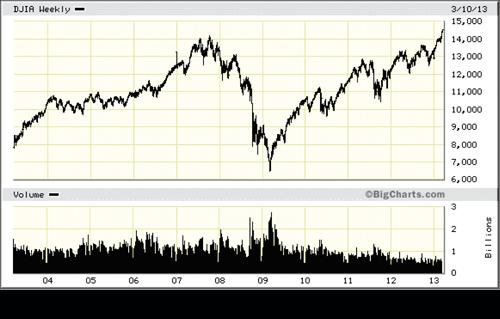 PHUKET: I recently read a report that had a comparative list of statistics from the last time the stock markets were up at these levels, which was just before the crash at the start of the financial crisis.

Early this march, the DOW reached a previous high level of 14164.5 and then surpassed that level. I thought it might be helpful to share this info, as it really does get you thinking about what is actually behind the market right now. These statistics deal with America but I think if you looked at the UK it would not be a very different picture. If you looked at Europe it could be even scarier.

For instance GDP growth was 2.5% as opposed to 1.6% in the US the last time the DOW was at these levels. There were about half the total number of unemployed, and the number of Americans living on food stamps has jumped from about 27 million to 47 million. This doesn’t seem like the kind of environment a stock market rally would thrive in, but then again maybe it is all about future expectations.

The US debt as a portion of GDP was 38%, now it has grown to 74%. The balance sheet of the Fed has grown from just under 1 trillion to over 3 trillion USD. Unless getting further into debt is practical common financial advice, it doesn’t appear the current policy decisions are going to lead to much except inevitable inflation from all of that printing. The credit rating of the USA was AAA last time markets were here, now only AA+.

While all of these in my opinion are reasons to be very wary of the markets at these levels, there is one indicator that I noticed which could mean this rally still has some legs. Consumer confidence was 99.5% back then, whereas it is only at 69.6% now. This is a contrarian indicator as the market tops usually coincide with tops in confidence.

Another interesting statistic is that a ten year government bond yielded 4.64% before the last crash and today it only yields 1.89%. This could be a big part of the reason why markets are rising, as investors are searching for alternatives to such low yields. Unfortunately my big fear is that they will all get stung with money that most likely belongs in the lower risk assets. It is a damned if you, damned if you don’t kind of situation for many. This is especially true if you live in Thailand and have seen the triple whammy effects of low yields, a strengthening Thai Baht and high local inflation.

One method of attempting to mitigate the risk of the current market without completely sitting on the sidelines is to counterbalance any stock market holdings with asset classes which performed positively during the last crashes. CTAs did extremely well, and there other alternatives as well. I would be very careful about being over exposed on the downside of the stock market given the ugly pictures the economic numbers still paint. Thanks to David Conway from Jupiter for compiling these.

He can be reached at david.m@faramond.com or 085-335-8573. Faramond UK is regulated by the FSA and advises on pensions and taxation.