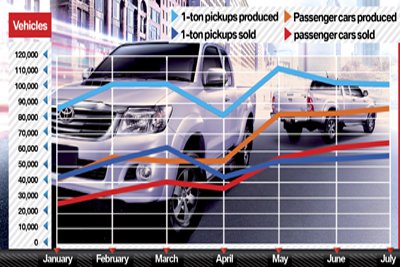 PHUKET: Reinforced with continuous, cutting-edge improvements to its steering and suspension systems, the Toyota Hilux Vigo Champ looks to retain its stronghold on the domestic pickup market.

The Phuket Gazette had the opportunity to join an exclusive tour of Toyota Motor Thailand’s (TMT) Ban Pho production plant recently, gaining a first-hand look at the prized truck’s production and assembly line.

Comprising of some 40 members, the Phuket group included representatives from the island’s public and private sectors, government offices and academic institutions.

During the trip, the Gazette engaged in discussions with representatives from TMT as well as with Phuket’s exclusive Toyota dealer.

Anusorn Kosasaeng, Sales Manager of Toyota Phuket Pearl Co Ltd, told us that he is confident that the brand will continue to hold its top market position.

He remarked: “The Hilux Vigo Champ has been recognized by JD Power [and associates] for being the top selling pickup truck in Thailand for six continuous years, and I don’t anticipate this changing any time soon.

“As we can see, TMT continues to put a lot into research and development in response to the needs of the market.

“The performance improvements have particularly focused on handling, steering and road traction, especially for rough terrain, hills and sharp curves,” he noted.

As for Toyota’s championing of the pickup truck market, Anusorn was adamant that it has been no easy feat.

“Such an accomplishment has no doubt been challenging, and has required a continuous effort to improve the performance of the vehicle on many levels,” he said.

Asked about the competition, which has increased much in recent years, Anusorn responded: “It would be very difficult for competitors to gain an edge on us.

“With its sustained commitment to quality, continued development of technology and top-of-the-line production standards, it’s not really surprising that Toyota has been the market leader in this segment for so many years.

“This is highlighted by the JD Power accolade.”

As for the objective of the tour, Anusorn explained: “We want participants to come and see with their own eyes the levels of quality and standards applied in the Toyota Hilux Vigo Champ’s production.

“We also want to give the participants a chance to test for themselves how reliable, effective and safe the new DTS system is.

Before touring the production plant, members of the tour group were given the chance to test drive the newest Champ on a controlled test track that featured a number of terrain simulation obstacles.

Following the tests, Yuthana Bunsablersdee, an automotive technician and pickup enthusiast joining the tour, told the Gazette that he was impressed with the performance of the new Champ.

“I noticed a clear difference in the different models. The suspension and breaking system [of the Champ] has improved a lot since earlier models. It definitely handles a lot smoother on steep hills and sharp turns.

“The good thing about Toyota is it is always improving its offerings to address the needs of the market,” he added.

Stay tuned for an in-depth business feature about the tour of the Ban Pho plant, which will be published online and in print next week.