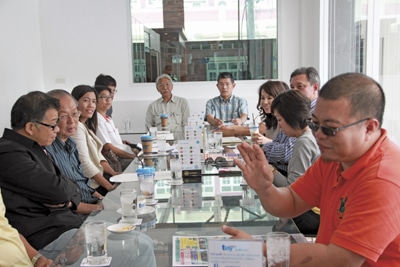 PHUKET: The Phuket Provincial Administrative Organization (PPAO) last week refuted claims that they had introduced a “new” tax to be collected on the sale of all fuels in Phuket, including diesel, marine diesel, benzine and gasohol.

The “maintenance tax”, levied as a 10% surcharge on the sale of all engine fuels, is the same tax previously collected by the Excise Department, explained Yongyut Luxsaviboonkul, PPAO Internal Audit Department Chief.

“In the past, the Phuket Excise Department collected this tax for us, but at the end of September we received a letter from the Excise Department in Bangkok saying that from October 1 onwards they will not be responsible for collecting the local maintenance tax on fuel for us anymore,” Mr Yongyut said.

The surcharge is to be levied retroactively, starting October 1.

Mr Yongyut’s comments follow the Phuket Petrol Retailers Club threatening to pass the cost of any new tax on to motorists by raising pump prices.

However, Mr Yongyut has again confirmed that there will be no “new” tax: “The Excise Department collected the tax for us for 12 years, now they say we have the authority to collect it ourselves,” he told the Phuket Gazette.

However, he added: “This change still might affect consumers since the fuel retailers might raise their prices. However, it will not be by a large amount. It will be about 4 satang (0.04 baht) per liter.”

Surat Sangnate, chief of the Tax Collection division at the Phuket Provincial Excise Department office, confirmed the move to have the PPAO collect the tax.

“I received a letter from Excise Department in Bangkok saying that from October 1, they will no longer collect the local maintenance tax for any provincial administrative organizations (PAO), but instead will hand this responsibility back to PAOs. This is because they think that right now PAOs have enough resources to collect it on their own.” Mr Surat explained.

After hearing the news, Mana Rattanayan, president of the Phuket Petrol Retailer Club, told the Gazette, “I did not know that the Excise Department would no longer be collecting the tax. That was not in the letter we received from the PPAO. All the letter said was that the PPAO will start collecting a ‘local maintenance tax’ from all petrol retailers.”

There are 22 petrol operators in Phuket providing fuel from Shell, PTT, ESSO, Caltex, Jusco and Bangchak, he said.

Mr Mana estimated that more than a million liters of petrol are consumed in Phuket each day.

Petrol prices in Phuket are currently higher than in Central Thailand, by as much as 50 satang per liter, due to a transport surcharge. Any rise in price at the gas pumps is likely to have a knock-on effect, the Gazette was told by petrol retailer representatives.