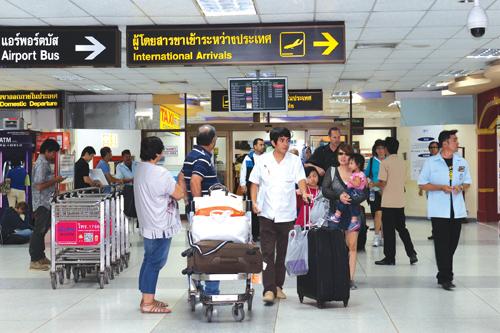 PHUKET: The director of Phuket International Airport (HKT) expects passenger arrivals to exceed 10.5 million by the end of this year, with related profits expected to be no less than two billion baht.

HKT director Prathuang Sorn-kham said that the airport is fully prepared to provide increased conveniences for passengers ahead of the its 5 billion baht expansion project, due for completion by 2015.

A number of upgrades currently underway will enable the airport to comfortably handle the target of 12.5mn passengers per year.

Mr Prathuang said that passengers coming to Phuket during this period, just ahead of the rainy season (which up until only recently, was traditionally considered tourism’s ‘dry season’) have increased by 12% over the same period last year.

He noted that the average arrival rate is now around 34,000 to 35,000 passengers a day, compared to this time last year, when there were about 28,000 arrivals per day.

Meanwhile, he expects the airport’s profit by the end of 2013 to be around 2bn baht, most of which will be generated by passengers and airlines.

Mr Prathuang explained that such profit derives from rental fees and taxes paid by airlines and other retailers based at the airport, but does not factor in the spending or expenditures of tourists once they leave the airport.

In response to the increasing passenger load ahead of 2015, HKT has already added a new x-ray machine at the check-in counters, bringing the total now to four machines.

Also, the airport has doubled the amount of x-ray machines in the airplane boarding area, up to eight from four, previously.

He went on to confirm that a new warehouse is currently under construction and will be completed in about eight to ten months.

The construction of five new airplane stands is also underway, which will increase the total from 15 to 20 stands. These are expected to be ready for use by the end of 2014, he said.

Phuket Business: US tax regime – Comply or else…