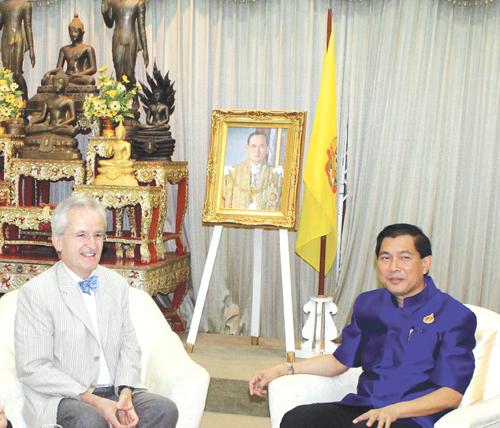 PHUKET: The new French Ambassador to Thailand, Thierry Viteau, made his first visit outside of his station in Bangkok recently to discuss in Phuket the need to strengthen relations in the tourism market.

“Phuket and Nice in France have been ‘sister cities’ since 1989; I want to take this opportunity to re-strengthen and renew our relations,” Amb Viteau, who assumed his position in October last year, told Phuket Governor Maitri Inthusut.

“I also want to focus on increasing business opportunities between our two nations,” he said.

Amb Viteau explained to Gov Maitri that he planned to invite small and medium enterprise (SME) businesses to Phuket to discuss cooperative investment opportunities between the two countries.

Gov Maitri, receptive to the idea, also suggested adding more special programs to the Alliance Française (French cultural center: see afthailande.org/en/alliance-phuket/) in Phuket. Special programs would help to give Thai people in Phuket a better understanding of France, he said.

Amb Viteau offered to write to the Mayor of Nice, Christian Estrosi, on behalf of Phuket to strengthen the relationship between the two cities.

Phuket Business: A land of opportunity