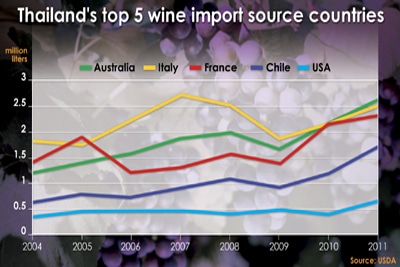 PHUKET: In light of Cabinet’s recent approval of tax hikes for cigarettes and liquor, the Excise Department is now looking to increase revenue shares from the trade of beer, wine and automobiles.

Quoted in a report by the Nation, Benja Louichareon, director-general of the Excise Department, said, “The department is also looking at whether it should increase tax on beer and wine.”

Since the rates levied on beer and wine have already reached the ceiling of 60% of the value, or 100 baht per liter, the department would need to propose a law amendment to the government in order to do this, she said.

The aim was to create equality in the liquor market, as well as to reduce consumption, she claimed.

Following the cabinet decision, the retail price of liquor increased by an average of 10-20 baht per bottle.

White spirit, which accounts for a large portion of the Thai liquor market, was unlikely to be significantly affected. ThaiBev enjoys the biggest share of this product, which is popular in the Northeast.

Benja said she did not believe there would be much smuggling of imported liquor and cigarettes as a result of the new tax rates.

Moreover, consumers were unlikely to shift from liquor to either wine or beer, as they were different markets, the department chief noted.

Following Cabinet’s approval of excise hikes on liquor and cigarettes, the duty levied on white spirits rose from 120 to 150 baht per liter, while that on blended spirits increased from 300 to 350 baht per liter, and that on brandy from 45 to 48% of sales value.

Meanwhile, the duty on cigarettes rose from 85 to 87% of sales value.

Benja also clarified that as a result of the tax hikes, the cost of a packet of cigarettes would be 3 to 14 baht higher, while white spirits would increase by 5-7 baht a bottle; blended spirits 8-12 baht more per bottle, and a bottle of brandy would be 3-12 baht more expensive.

Some activists have warmly welcomed the government’s decision to raise the tax on cigarettes and liquor, describing it as a move that would reduce the damage on the country as a whole.

“More than half of all [crime] offenses committed are related to alcohol consumption,” Thirapat Kahawong, the head of an anti-alcohol network, said.

He was among 30 activists who showed up at the Excise Department to express support for the government’s decision.

Jadet Chaowilai, an adviser to the Network of Alcohol Victims, said the move would reduce the number of injuries, disabilities and deaths caused by alcoholic beverages.

“The move is for the good health and well-being of people,” he said.

A study commissioned by the Thai Health Promotion Foundation suggests higher cigarette prices will reduce the number of Thai smokers by about 0.5 %.

“The number of smokers should drop by between 60,000 and 70,000,” said the foundation’s deputy manager, Supreeda Adulyanon.

“We will have to introduce other measures too, such as limiting the availability of cigarettes.”

Thailand is currently home to about 13 million smokers.

Beyond cigarettes and booze, Ms Benja revealed that the government is also considering raising the bar for automobiles.

The Excise’s Department’s director-general said a new car tax would aim to limit the emission of carbon dioxide, instead of promoting power efficiency, which is a key priority under the government’s current eco-car tax scheme.

She said the existing tax incentives did not work as envisaged by the department. For example, those who drive passenger cars that could run on E85 (fuel that is 85 per cent
ethanol) or E20 tend to use E10 instead, anyway.

Currently, the tax rates for cars powered by E85 vary from 22 to 32%, depending on the level of engine power.

Benja views these different tax rates as complicated and not achieving the intended goal.

In any case, the director-general said that more consultation with auto manufacturers was needed before changes could be made, adding that she understood the industry had invested a lot of money to meet the current tax-incentive criteria. Some car makers have asked for an adjustment period of three to five years.

Phuket Business: Beware of the hammer and nail approach