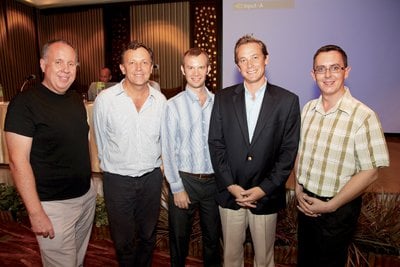 PHUKET: The American Chamber of Commerce (AMCHAM) Greater Phuket Chapter assembled at Holiday Inn Patong for its third meeting of the year recently.

Moderated by Arnfinn Oines from the Soneva Resorts, the panel comprised three distinguished property heads: Anthony Lark of Trisara, Ty Collins of JW Marriott Khao Lak and Morgan Layberry of Holiday Inn Patong – who were given the floor to talk about the initiatives they are trying to, or have already put in place to make their hotels more environmentally friendly and cost efficient. Following are highlights of the discussions.

Morgan Layberry from the Holiday Inn emphasized that sustainability can’t be achieved overnight and that hotels have to be in it for the long run. He mentioned that the Holiday Inn is aligned with Leadership in Energy and Environmental Design (LEED) to help the hotel achieve its optimum green performance.

Aside from this, Morgan highlighted the importance of extending green initiatives across all links in the operational chain. One example he gave was in regards to his efforts to reduce the amount of unnecessary waste. By working with suppliers to cut out unnecessary ‘packaging’ steps such as boxing and wrapping, he argued that you not only reduce rubbish (cellophane, bags, and boxes), but you can also save the time wasted for staff to have to separate the packaging. Instead, Morgan provides reusable containers for suppliers to deliver produce, which gives cost savings for the suppliers as well.

Saving the environment can also help a company to reduce its overheads. Ty Collins understands this incentive, noting that the hotel’s energy bill had an annual spike of 43% during low season and 93% during peak season.

To counter this, Ty has been committed to optimizing operational efficiency, by aligning with strategic partners such as Ecolab, which provides water, hygiene and energy technologies and treatment to the hotel. They also use Entech to monitor electricity consumption. Moreover, the Marriott has made extensive efforts to educate its staff about environmental issues and conservation practices.

Anthony Lark highlighted Trisara’s self-sufficient water management system. The hotel has found a way to reuse water and manufacture their own water. Its clever rain catchment system helps the property meet most of its landscaping needs, which comprise 80% of all its water use. However, Anthony noted that since potable water was still coming to the hotel in trucks, and distributed in plastic bottles, the hotel was going through a quarter of a million plastic bottles of water per year.

To curb this negative impact, the property decided that it was in its best interest to build a reverse osmosis water treatment plant on site, and design their own glass bottles to replace the plastic bottles. Costing only one million baht, the initiative will see a return on investment in only nine months, he claimed.