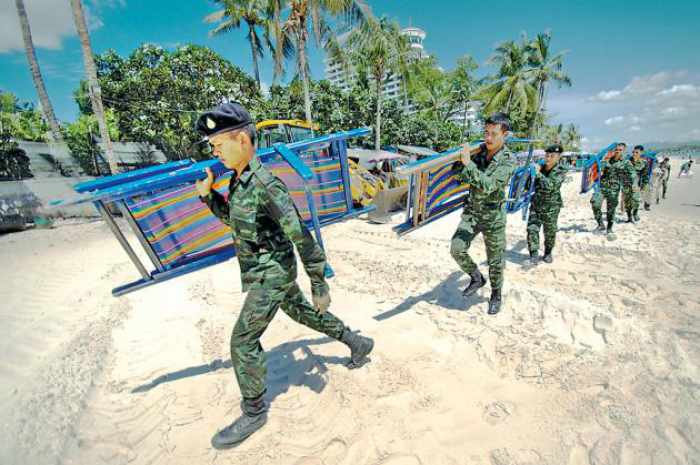 PHUKET: The National Council for Peace and Order (NCPO) is encouraged to continue improving the public image of attractions across the country in a bid to draw more tourists in the coming high season.

“More major tourist destinations such as Pattaya and Bang Saen in Chon Buri, the city of Chiang Mai, Koh Samui in Surat Thani, Koh Chang in Trat and other popular beaches in the South need to restore their image and also get rid of local mafia gangs,” Prakit Chinamourphong, ex-president of the Thai Hotels Association, said yesterday.

Tourism had suffered damaged for years by local people through scamming. A lot of tourists were also cheated, and that sullied the country’s reputation, he said.

The Thai Hotels Association and key travel associations including the Association of Thai Travel Agents and Domestic Travel Association have called on the Tourism Ministry to crack down on the mafia at destinations for many years but nothing was achieved because of interference from local politicians and businesses.

However, when the NCPO moved to clean up management and organize several places such as Patong Beach in Phuket and Hua Hin in Prachuap Khiri Khan, their tourism images immediately turned beautiful, he claimed.

Earlier, the Tourism Council of Thailand asked the junta to reappoint the National Tourism Policy Committee to deal with tough situations as well as to solve problems at tourist attractions nationwide.

The body has been inactive since the military took control of the government in May.

The Tourism Council also asked the military to continue rebuilding the country’s tourism image in order to restore tourists’ confidence. Some of the urgent problems needing to be fixed are illegal taxis, tourist scams and non-standard operators at beaches.

The Thai Hotels Association and the Tourism Council recently proposed tourism recovery plans for short and long terms to the junta in order to help revive the economy. The private sector has also asked officials to boost security and safety measures for visitors and promote domestic tourism.

Many tourists are returning to the country ahead of the peak season beginning in October. Chinese tourists are pouring into Thailand this week, just after visa fees were waived for them (story here).

Recently, the Tourism Authority of Thailand arranged a special greeting for groups of Chinese tourists in a bid to polish Thailand’s tourism image (story here).

Rubber growers bounce back with with tyre factory