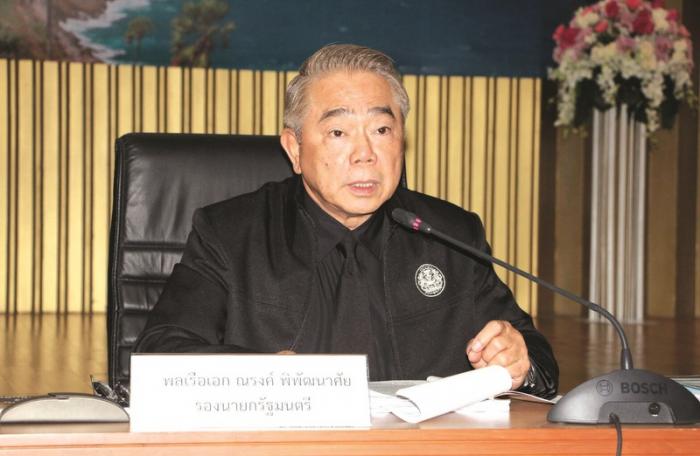 PHUKET: Deputy Prime Minister Admiral Narong Pipatanasia met with the governors of Phuket, Phang Nga, Ranong, Krabi and Trang last week to push for the implementation of the Prime Minister’s ‘Thailand 4.0’ policy to bolster the economy in the Andaman region.

At the meeting, held at Phuket Provincial Hall, Admiral Narong said that the nationwide plan initiated by Prime Minister Gen Prayuth Chan-o-cha aimed to develop the region from the ground up.

‘Thailand 4.0’ is part of a nationwide 20-year strategic economic reform and development plan launched by the PM earlier this year, with a public relations campaign encouraging co-operation from all sectors of society to make the initiative a success, said PM Prayuth in one of his regular public ‘Return Happiness to the People’ addresses on July 1.

“We need a collective effort to move the country forward under the vision of ‘stability, prosperity, and sustainability’,” said the PM.

Admiral Narong added that part of the initiative was to iron out differences and unite society with equality.

“Each province must focus on its strongest points, but more importantly the government and private sectors must work together to drive Thailand 4.0 forward,” he said.

Budgets are to be allocated to each province in the Andaman region and must be spent in the best way possible to benefit locals, stressed the deputy PM.

“Provinces must also have back-up plans in case their main projects are not approved by the central government,” he said.

Phuket Governor Chokchai Dejamorthan said the Andaman provinces should focus on developing tourism as well as the region’s fame as a ‘world kitchen’.

“We have a world-class tourist destination based on sustainable agricultural communities, and we should be focusing on generating more income to support local food products and the unique traditions and cultures of the Andaman region,” said Gov Chokchai.

He added that the strategy includes developing ‘the four Ss’, namely ‘Standards, Security, Safety and Sustainability’.

Business Buzz: Social Media trends to look out for in 2017