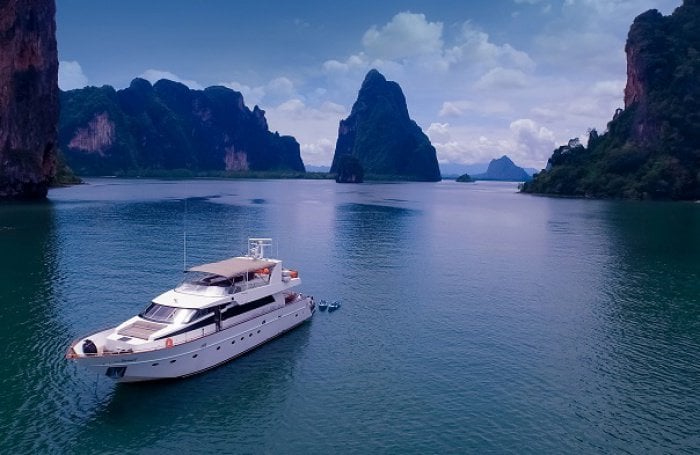 PHUKET: Phuket has been recognized as a world-class cruising destination for many years, with the majority of sailors visiting during the ‘high’ season months. This period is noted for its favorable weather that keep the skies clear, cruising grounds sheltered and beaches packed. However, it is the ‘green season’, from June to October, that is becoming a popular alternative, offering a rare glimpse of a quieter Phuket.

Traditionally, the approach of the southwest monsoon was celebrated not only for the life giving, rejuvenating rains but also for the arrival of the trading ships from India and Arabia. Nowadays, surfers and kite-boarders gather on Phuket’s western shores in anticipation of the onshore wind and swell to return; game fishermen await the cooler waters for more bountiful catches; and real yachtsmen look forward to secluded cruising grounds and stronger winds.

During the green season months, cruising around the Andaman region changes dramatically. To sail during this time is to experience these enchanting destinations as they were decades ago: the islands are reinvigorated, vivid and nourished from the rains and the anchorages peaceful and pristine.

There are numerous pick-up points around the island of Phuket to start a cruise and many yachts offer discounted rates.

The bay remains calm year-round and while there’s no snorkelling, exploring the in-island rooms or hongs of Koh Panak is unbeatable.

Koh Yao Noi offers stunning views of Phang Nga Bay and Krabi and is within a short distance from the main island of Phuket, which provides a multitude of land-based activities and hotels, usually heavily discounted during the green season.

During the high season over-crowded islands such as Koh Dam Khwan (Chicken Island) often lose their charm. However, this quieter period sees their mystique return and they are often found deserted. Phi Phi Island is consistently popular throughout the year and offers sheltered anchorages in various weather conditions, providing easy access to the shore.

The key to enjoyable cruising in the low season is to remain flexible and have realistic expectations of how the weather will affect your trip.

While most days are clear, tropical squalls do roll through on a regular basis, yet rarely last for more than an hour. On average, the wind is consistently stronger than during the high season, generally welcomed by sailors and the reason why numerous regattas are held at this time of year. The swell around Phuket is considered quite small, however southwest and westerly facing anchorages are not advised for overnight stays.

With a well-advised itinerary there is little need to limit the cruising season to the high season months as this allows those who don’t mind the odd downpour a fresh perspective on unrivaled cruising.

Business Buzz: The benefits of websites