PHUKET: Boat Arcade will continue to focus on children’s activities and their needs in the second phase of the project, following the recent completion of the first phase, where the area has been developed as the ‘East Coast Edutainment and Family Center,’ confirmed Kanittha Prasopsirikul, managing director of ‘By Kanittha’ Company and Boat Arcade’s public relations representative.

The marketing strategy focuses on the simple fact that a child’s well-being and happiness are the bottom line for most families.

“A kid is like a king of every family, a real boss. If you get a kid, you get the whole family,” Ms Kanittha told the Gazette. “After the huge success of the first phase, we are launching the second phase of Boat Arcade with many more attractions.” 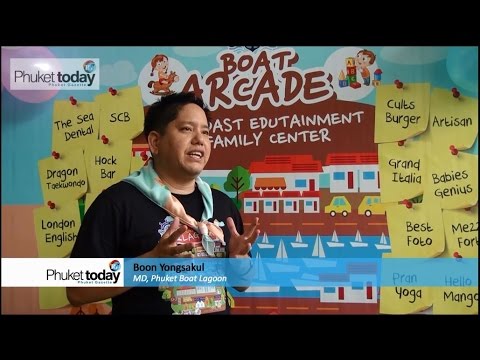 Boon Yongsakul talks about his aspirations for the Boat Arcade Edutainment and Family Center. Video: PGTV

The 50,000 square feet of retail space in the first phase is already 100 per cent occupied by 25 shops, many catering specifically to children’s needs, and Villa Market.

“As you can see, we are really transforming Boat Lagoon from a working marina to a lifestyle marina and village. We called it the ‘New Boat Lagoon’,” Deputy Managing Director of Boat Development Company Boon Yongsakul said during his opening speech last week.

“From our market research, we strongly believe that the new community on both sides of Thepkrasattri Road, with many new, big housing projects, will generate traffic and become a new community of its own. Therefore, our Boat Arcade will be ready to serve this new exciting neighborhood and community.”

A large part of the foundation of the targeted community in Koh Kaew is derived from the British International School, Phuket [BISP].

“Twenty years ago, when British International School, Phuket was built, much of the surrounding area was still farmland and forest,” BISP Marketing and Communications Manager Simon Ostheimer told the Gazette. “In the intervening two decades, Koh Kaew, and the east coast of Phuket in general, has seen an explosion of housing complexes – including the arrival of big developer names like MBK, Land & Houses, and Sansiri – and, in more recent years, increased shopping, dining and entertainment opportunities.

“With its family-friendly mix of shopping, dining and edutainment, Boat Arcade is a great addition to the Koh Kaew area. I know that our parents, students, staff and the entire BISP community will be pleased to have additional offerings like this on our doorstep.”

Boat Arcade will bring a number of features to the east coast community when it officially opens next month. There will be an indoor adventure playground, music and language schools, as well as art and martial arts classes.

There are also a number of boutique shops, dining venues and other draws for parents.

Ms Kanittha added that details of the project’s second phase would be announced in the fourth quarter of this year, but it is already 60 per cent sold out.

Business Buzz: Consistency is the key