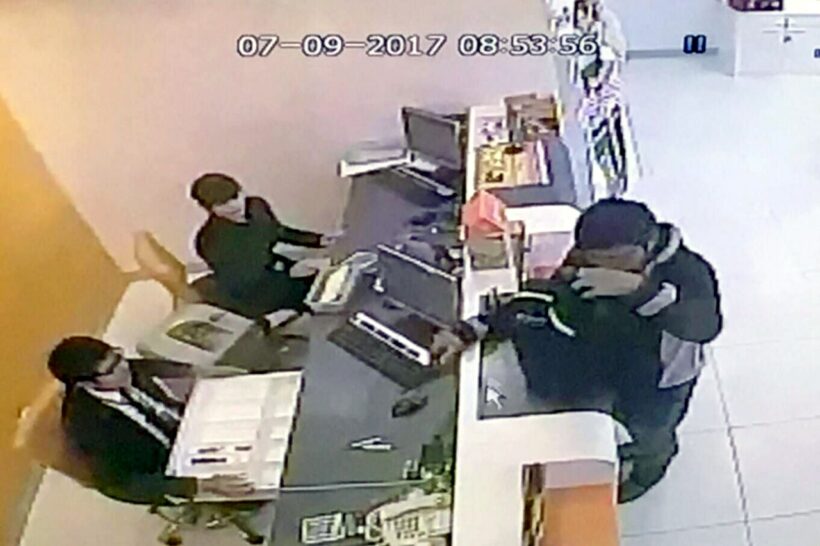 “I’m sorry, I have financial problems,” That’s what a lone gunman told a teller of a Thanachart Bank on Rama III Road on Thursday before escaping with 270,000 Bt in cash.

The man, aged about 30, spent about one minute robbing the Bang Khlo Laem branch at about 8.52am. A witness told police that the man wore a hair net that motorcyclists sometimes wear under their helmet.

Pol Maj-General Surachai Kuandechakup, the deputy metropolitan police commissioner, said the suspect approached the teller, showed an undetermined model of gun and demanded that she give him money.

“The suspect told the teller that he was sorry and he had money problems,” Surachai said.

He then put the money into his bag and walked out of the bank quietly. The security guard even opened the door for him, assuming that he was a just a hired messenger.

Surachai said that judging from what the suspect told the teller, he was not a professional criminal. A bank security guard told police that the robber looked familiar and may be a bank customer.

Wat Phrayakrai police are checking the bank’s security cameras to try and identify the robber and create a sketch. Some witnesses said they clearly saw his uncovered face.

Police say the gunman wore a black T-shirt and black trousers. He entered the bank carrying a bag and behaved like a typical customer.

The suspect then drew a gun on the teller and demanded cash. After leaving, he was seen fleeing towards Rama IX Bridge. Five employees and a cleaner were in the bank at the time.