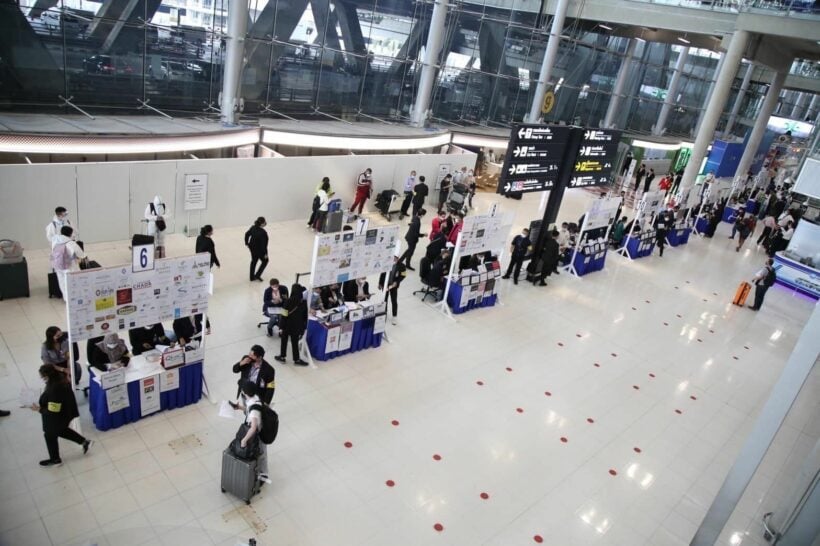 Suvarnabhumi International Airport has responded to the complaint from a Thai YouTuber about the seemingly chaotic crowds of international travellers arriving under the Test & Go entry scheme on Sunday. He said that people coming into the arrivals hall didn’t know where to go, couldn’t find their hotel transport, the awaiting hotel shuttles were randomly crowded behind barriers and it was, well, “chaotic”.

The Airports of Thailand, who operate 7 of Thailand’s largest airports, explained in a statement that the crowding had happened only temporarily, and they’ve already fixed the problem by extending the space, adding more service counters and ordering the hotel names alphabetically so they’d be easier to find.

On Sunday, Thai YouTuber Atichan Cherngchavano aka “Au Spin9” complained about the airport management after finding crowds of travellers from the Test & Go program were left standing and confused in Suvarnabhumi airport. He said the situation was a mess, as the hotel staff had to shout out their guests’ names, while the travellers had to search for their hotel logos randomly “like playing a puzzle game”.

Yesterday, after his complaint went viral on Thai social media, the official Facebook page of Suvarnabhumi Intentional Airport issued a press release to explain the situation. The caption on the post read…

” Regarding to the issue of the crowded travellers and inconvenient service at the meeting point inside the airport terminal that was shared online, Suvarnabhumi Airport would like to clarify that the crowd happened at a peak time, and it happened only temporarily for a short period. The airport has already extended the service space, added more hotel counters and arranged the hotel counters alphabetically according to their names.”

The General Manager of Suvarnabhumi Airport, Kittipong Kittikachorn, shared in the press release that more passengers travelled to Thailand from April 1 after the Centre of Covid-19 Situation Administration relaxed the restrictions to ease the pre-arrival PCR test.

The manager added that the airport and the Emergency Operation Center had already improved the service for the best efficiency to support the increasing numbers of passengers. The hotel counters at a meeting point inside the airport terminal were increased from 8 to 17 counters, and the hotel names were arranged alphabetically. Besides, the baggage reclaim was expanded into two tracks to make it quicker for travellers to grab their bags. Other than that, he said that more hotel and airport staff, as well as officers from the Thailand Tourism Authority, would be on stand by.

Many Thai netizens commented on the airport’s response. Some thanked the authorities for taking comments from passengers into account and immediately fixing the problem, while others thanked the YouTuber who raised the alarm, which resulted in immediate improvement. However, others commented that the changes hadn’t made much of a difference, as the airport still appeared to be crowed, judging from the pictures.

Poolie
8 minutes ago, JJJ said: Glad you don’t have a business or employees to worry about. Me too! 😃 When I did have I didn't worry either 'cos when you've finished worrying you still have the problem to solve. Much…
Janneman
There were about 1,500 – 2,000 passengers arriving during the peak hours, and the maximum capacity of the airport to welcome the arriving passengers is currently just 3,000 people per hour due to Covid-19 prevention measures. Weird, with less people…

You can grow ‘as many cannabis plants as you like’ in Thai homes from June 9, but…