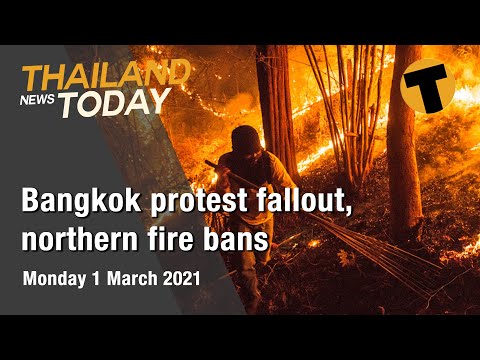 Coming up today… the fallout from yesterday’s latest protest violence in Bangkok, the first vaccine in Thailand who got it, and a major drug haul along the Mekong.

But first we’ll start up north where Lampang Province is joining other northern provinces todday by putting a total fire ban in place from today, March 1, until the end of April. Chiang Mai also started a ban on all deliberately lit fires from today and Lamphun, just south of Chiang Mai, already has one in place.

The bans are timely after a horrid weekend of air pollution in many of Thailand’s provinces over the long weekend, even as far south as the tourist destination of Phuket where visibility was down to about 1 kilometre and the smell of smoke was noticeable.

Whilst up in the north… 4 Thai women were arrested at a security checkpoint in Tak’s Mae Sot district after they illegally crossed the border from Myanmar into Thailand.

Illegal casinos and fancy hi-so massage parlours in Myanmar in areas near the border, have attracted wealthy Thais and Burmese. The establishments have also attracted plenty of Thais looking for well-paid work across the border.

In a major bust along the Mekong River, a notorious hotzone for drug trafficking, border patrol police seized 920 kilograms of dried, compacted cannabis from a boat along the Nakhon Pathom riverbank, bordering Laos.

At least 22 people were arrested during the major Bangkok protest yesterday. It turned violent as pro-democracy activists marched toward the Thai PM’s residence. It’s been reported that one officer died during the rally, reportedly due to heart failure.

At least 33 people were injured… that includes 23 police officers. The clashes happened in front of 1st Infantry Regiment barracks on Vibhavadi Rangsit Road and involved around 1,500-2,000 activists from  the Restart Democracy movement, part of the Free Youth group. The group has been protesting against the government and calling for reform of the country’s constitution and monarchy since protests began in July of last year.

And Thailand’s Covid-19 vaccine campaign started with Public Health Minister Anutin Charnvirakul who received the first of China’s Sinovac vaccine yesterday. PM Prayut Chan-o-cha was initially planned to be the first to kick off Thailand’s immunisation plan with the AstraZeneca vaccine, but due to problems with paperwork, the PM’s injection was postponed.