Daily News is reporting that a large cache of evidence in the form of computers, notebooks, phones and account books was recovered during the raid on two sections of the PS Tower last night (Friday).

Suspicions were aroused when a lot of Chinese people were seen working at two the companies – and they hardly every went out, according to the report in Daily News.

They were taking bets on 20 different card games popular with Chinese people. One was poker. Bets were taken in China and transferred using Union Pay and We Chat according to Maj Gen Surachet who was again working with a joint Thai and Chinese specialist ‘tech’ police force.

Both raids were on companies operating on the 13th floor of the building. In the first suite of rooms there was panic among the Chinese workers present when the police entered. They tried to flee but all 22 were arrested. There were 17 men and 5 women taking bets under the name of ‘Sapvinchi Technology Co Ltd’.

Nearby, at the offices of Sool El Technology Co Ltd, a further 36 arrests of Chinese citizens were made – 28 men and eight women. Everyone arrested were on tourist visas.

Surachet said there was a Filipino boss called Steve and other Filipino managers though these were not mentioned in the arrests.

Turnover of the businesses, causing economic damage to the Chinese, was 700 million baht. Bets were taken on the www.Tiyo.com website.

Police are now chasing the Thai people who acted as nominees for the companies registered by the Chinese operators of the scam. 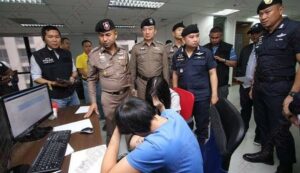 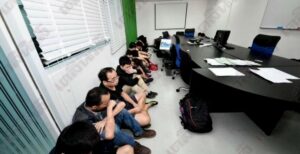 What a difference an airport could make