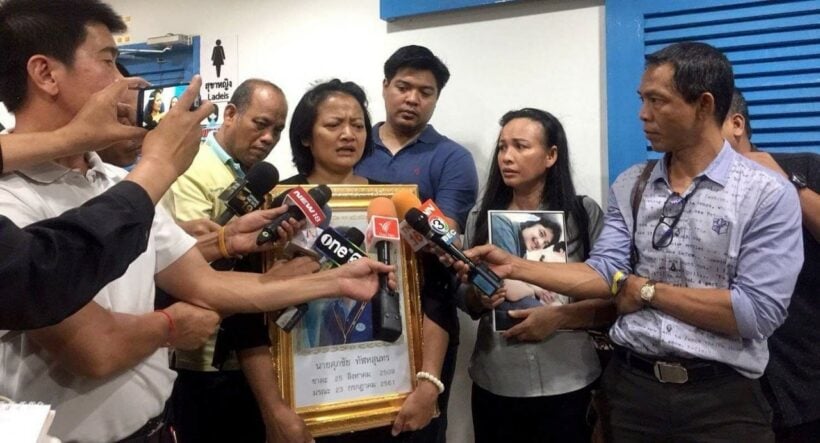 The suicide of a father, who jumped out of the eighth floor of Bangkok’s Criminal Court after a verdict was read acquitting the suspect in his son’s murder back in 2016, has taken a sad turn of events. Now the wife of the man who killed himself, and the murdered son’s mother, is threatening to kill herself as well.

She revealed yesterday that she tried to kill herself along with her husband and threatened to take her own life if the Appeals Court upholds the verdict.

“If I lose the court battle again, please collect my body,” Rewadee Kanlahasunthorn said tearfully about the case against Nattapong Ngern-khiri.

On Monday, Rewadee’s husband Supachai jumped to his death from the eighth floor of the Criminal Court building on Bangkok’s Ratchadapisek Road after the judge announced he would give the benefit of the doubt to Nattapong.

Nattapong, the suspect, had been accused of fatally stabbing Thanit on Prachasongkroh Road in Bangkok’s Din Daeng district on April 15, 2016. The other defendant in the case – who has already been tried in the Central Juvenile and Family Court due to his young age – pleaded guilty to bringing a weapon to a public place and killing Thanit.

The distraught mother also revealed that she intended to commit suicide at the same time as her husband, but was subdued by security guards at the court.

“I have been suicidal since the death of my son. No one has really helped us with the case. My husband had to leave his job to try to gather evidence. We had done our best and we had never imagined that the court would acquit the defendant,” she said.

She said her husband was quite optimistic when they went to the court together on Monday.

“So, I didn’t think that he would jump from the building. He told me he would go to the toilet,” Rewadee said.

“Then, I heard someone had jumped,” Rewadee said. “It turns out to be my husband.”

Nattapong is described as the son of a wealthy, locally-influential family. Rewadee said “witnesses are afraid” to come forward.

The only witness who told police he saw the killing has suffered brain injuries in a road accident and is unable to appear in court to testify. This contributed to Nattapong’s acquittal.

Rewadee thanked police for their fresh efforts to gather evidence.

“I believe that the culprits will be brought to justice if police try harder during the investigation process,” she said.