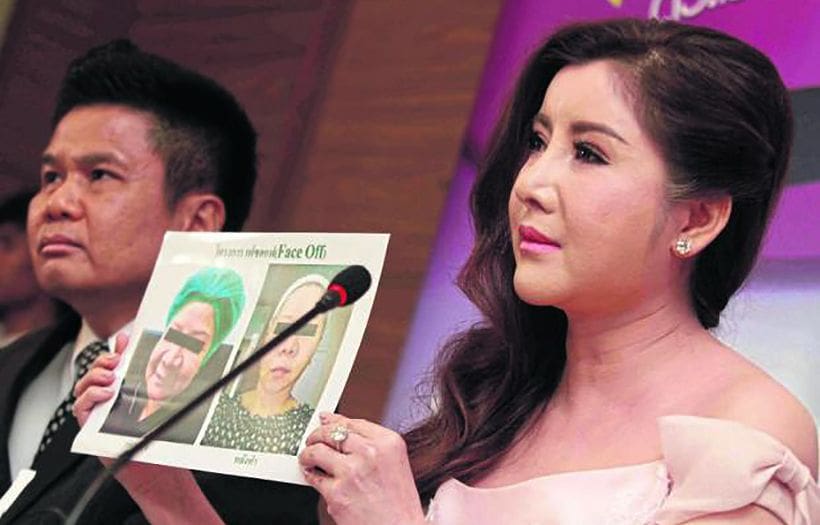 Beauty expert Xeping Chaiyasan has been charged with fraud but continues to deny any wrongdoing claiming the allegation has been brought against her by people with malicious intent.

Xeping is known as “Dr Xeping”, although she is not a medical doctor, became famous for the so-called Face Off cosmetic surgery services she promoted.

Her arrest, along with Face Off associate Botthamakorn Wattananon, at a luxurious house in Muang Nonthaburi, stems from a police complaint filed last month by seven people who underwent her program’s surgical procedures but didn’t get the results they believe they were entitled to expect, according to police.

The claimants said they had been told there would be no scars or bruises and that they would look 10-20 years younger. Later, however, they felt their results weren’t like that at all.

The seven people, who say they paid 5 million baht to Face Off, lodged complaints with police, resulting in a court issuing arrest warrants for Xeping and Botthamakorn for public fraud. That offence is punishable with a maximum five-year imprisonment and/or a maximum 10,000 baht fine.

Face Off made headlines in 2016 when a famous singer, Surachai Sombatcharoen, went to them seeking cosmetic surgery to make her look younger.

Xeping was immediately criticised by several doctors over her use of catchy words in advertising and their concerns that her claims could mislead consumers into having unrealistic expectations.

Police say Xeping, who has a PhD in business administration, had conducted preliminary facial analysis and arranged for her clients to have plastic surgery in hospital. Police had so far identified one hospital and two plastic surgeons who had worked with her.

One of the victims, Raiwin (last name withheld), said she could hardly look at herself in the mirror nowadays as she couldn’t bear to see her “disfigured face”. She also claimed her foreign boyfriend of more than 13 years had become distant and may dump her after her failed cosmetic surgery. 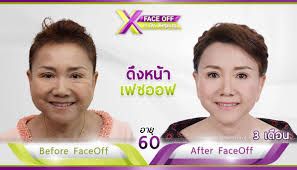 Some of the advertising that’s got ‘Dr’ Xeping into trouble