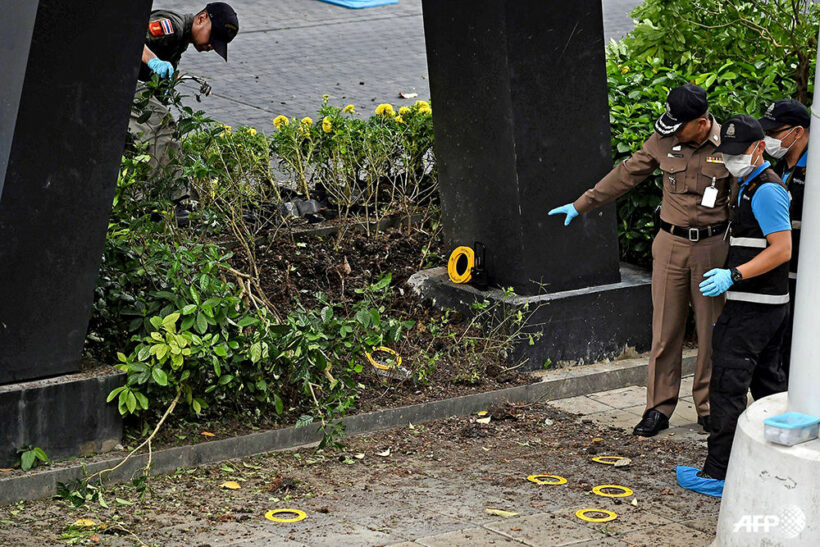 Police continue their investigations to unravel the people behind last Friday morning’s bomb blasts around Bangkok and the likely related case of two unexploded devices found outside Royal Thai Police HQ the night before. At this stage police acknowledge that the attacks were most likely more about gaining attention rather than hurting citizens or tourists although four people were slightly injured as a result of the explosions.

The attacks coincided with the final day of meetings of the ASEAN group being held in Bangkok including a visit from the US Secretary of State Mike Pompeo.

This is what we know at this stage…

• Officers continue to interview people seen with suspects, including taxi drivers and check all CCTV cameras in the areas where the incident happened.

• At this stage there have been four arrests and warrants are expected to be sought for at least seven more suspects as Thai police close in on the group behind the blasts, and their motives.

• There was a total of nine bombs, six that exploded and three that were safely disposed, plus six arson attacks in six different locations.

• The events started unfolding last Thursday afternoon when two objects, thought to be bombs, were dropped off on the steps on the Royal Thai Police Headquarters

• The first devices went off at 6.10am at the entrance to Building B at the Government Complex in Bangkok’s northern Chaeng Watthana district. No one was injured in the small blast.

• Thailand’s army chief, Gen Apirat Kongsompong, has linked the attack to past violence aimed at embarrassing the government during previous meetings of the ASEAN in Pattaya and Phuket.

• The investigations into these attacks have been much more forensically intensive compared to the investigation following the August 17, 2015 bombing at the Erawan Shrine at the Ratchaprasong Intersection in Bangkok that killed 20 and injured another 125, many foreigners. In that case officials seemed more intent in ‘cleaning up the scene’ and getting the shrine reopened as soon as possible.