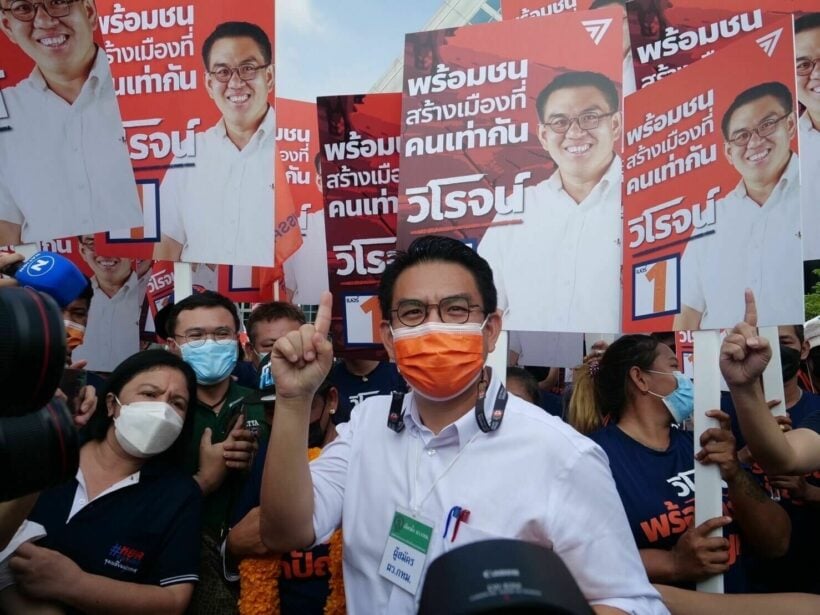 Candidates for Bangkok started registering at City Hall 2 yesterday. Registration will last until April 4, and polling will be on May 22. The candidate to arrive earliest was an independent candidate who showed up at City Hall at 6am. Other candidates represented several different parties including Thai Sang Thai, the Democrat Party, and Move Forward Party.

The independent candidate was Chadchat Sittipunt. Chadchat said he won’t put up campaign posters because he wants people support him based on his character. He arrived at City Hall on his bicycle because he wants Bangkok to be a green city. Chadchat said, however, that Bangkok’s city roads made the ride over difficult.

The Move Forward candidate is Wiroj Lakkhanaadisorn. Wiroj is campaigning to remove fences around Sanam Luang a public square and park in Bangkok, to give the public more access to it. The park has a long history, with its auspicious location and role in the life of Thailand’s royal family and ceremonies, as well as a location for protests. It was the site of the 1976 ‘Thammarat Massacre’ where government and police cracked down on ‘leftist’ protesters.

Wiroj says the square should become another green space accessible to locals. He visited Sanam Luang last week as part of a campaign to “reclaim Sanam Luang”. Wiroj said there is already CCTV at Sanam Luang deterring people from committing crimes, and therefore fences aren’t necessary.